Pellegrini’s has reopened this morning following the tragic loss of Sisto Malaspina.

Malaspina was killed on Friday afternoon after a man crashed a car loaded with gas bottles in the heart of Melbourne’s CBD.

The 74-year-old restaurateur was stabbed after he approached the car which had burst into flames.

In honour of Malaspina, Pellegrini’s will be serving free long blacks to customers all day. “It was Sisto’s favourite and will be in memory of him,” reads a statement from the cafe.

“Our lasting tribute to Sisto will be to continue to serve the people of Melbourne and others from around the country and other parts of the world with whom we have shared much happiness over the decades and now share our grief.”

The community is in mourning over the loss of the restaurateur, with masses of flowers, gifts and notes placed on the doorstep of Pellegrini’s.

A sign dedicated to “the best boss” was left in the window of the restaurant, thanking Malaspina for looking after staff and treating them “like family”. 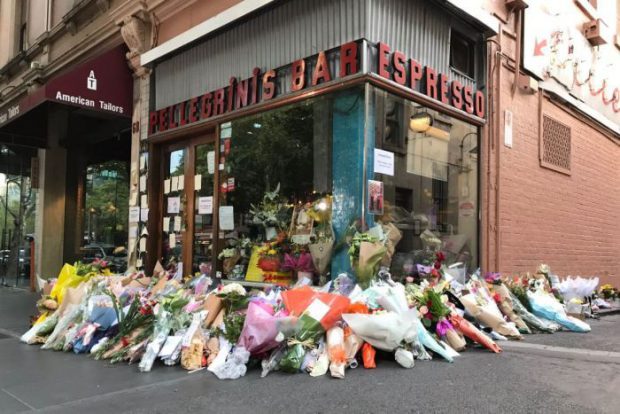 It’s also reported Crossley Street, which runs alongside the eatery, may be renamed to Sisto Lane, which Victorian Premier Daniel Andrews called a “fantastic idea”.

Malaspina’s family released a statement on Monday, thanking the public for their support.

“To the people of Melbourne, your heartfelt tributes have shown us why our Dad loved this great city so much,” reads the statement.

“Each customer of Dad’s was given the same respect and service regardless of their standing in society. To him everyone was special. His love and passion for his customers remained the same for over 40 years. To him it was a joy to go to work every day.”

Hospitality interviewed Malaspina last year, where he spoke about his strong relationships with staff who were “respected and treated as family” and the importance of maintaining tradition.

“Pellegrini’s was the number one in the way it did things, the way things should be done – fresh ingredients taken from the growers to the market to the shop,” said Malaspina. “Everything done by hand. No mechanisation, no additives.

“And it hasn’t changed at all. It’s still the same menu, prepared in the same way. This is the way food should be done. It’s not contemporary food. It’s secular, traditional, home cooking.”

Malaspina also spoke fondly of his role within the restaurant he ran with his friend Nino Pangrazio since 1974.

“We’re not really the owners, we’re custodians of this beautiful place.”

A state funeral will be held for Malaspina early next week.

Hospitality sends our condolences to Malaspina’s family and friends.