If Jo Barrett wasn’t a chef, she might be a florist. Although her list of interests is long, cooking was always going to be her career. She’s been in commercial kitchens since the age of 14 where she started as a dish hand before becoming an apprentice.

Now 31, Barrett is one of the industry’s most watched talents, leading the kitchen as co-executive chef at one of the most recognisable venues in Australia, Oakridge Wines.

“All I ever wanted to do was be a chef,” says Barrett, explaining the decision to start her apprenticeship while completing her final year of high school in 2006. “I’d lined up my apprenticeship, but they wouldn’t take me unless I finished school.” So, Barrett juggled TAFE with year 12.

The dedication paid off one year later when her apprenticeship was fast-tracked thanks to her previous experience. Barrett went straight into second year at Melbourne’s De Lacy. The modern Australian bistro-cum-fine diner had been a fixture in the CBD for more than 20 years at that stage.

At the time, however, her placement was made off the back of a recommendation. “I wasn’t really in the food scene at that point,” says Barrett. “I didn’t know who the hottest chefs were; it wasn’t a thing back then.”

When De Lacy closed in 2007, Barrett found herself in Canada thanks to a TAFE scholarship. After five months of full-time study, she stayed on and joined French bistro, The Tribune. With big hats, ice carving and a brigade system, Barrett’s time in Canada was nothing like her experiences in Australia. “It was really classical,” she recounts. “They had proper sections and you actually moved through the kitchen.”

At culinary school, students undertook buffet training and tableside carvery. “There was a duck press — stuff that’s not around in Australia,” says Barrett. The chef thrived in the classical environment: it matched the world of restaurant kitchens she’d read about in books and suited her learning style. It also helped her see a future in the industry. “If you have a good foundation, you can see where it could take you,” says Barrett. 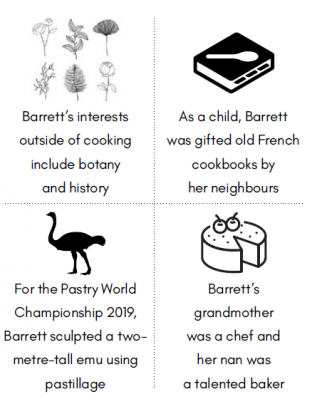 Back in Melbourne, Barrett’s studious nature surfaced again during a stint at Frank Camorra’s MoVida. Despite an initial aversion to the dessert section, it was here the now ambidextrous chef decided to turn her hand to pastry.

When Brothl shuttered in February 2015, Barrett and Stone started planning their own venue. “We didn’t have much cash, so we were just going to open a wholesale bakery until we had enough money to open the restaurant we wanted,” says Barrett. A site was found, but extensive delays ensued, and so did serendipity. Just as Barrett and Stone found out about the hold-ups, they were approached by Oakridge Wines.

Accepting the offer to run a restaurant in the countryside surrounded by local produce and native ingredients wasn’t a hard choice — and it was a no-brainer when the owners said they could have a kitchen garden. You see, Barrett grew up in the suburbs of Melbourne and spent plenty of time outdoors growing fruit and veg.“I really enjoyed cooking and the connection with nature,” she says. “I loved growing produce, and seeing how it changed when you applied different techniques.”

In July the same year, the move was confirmed and the pair took the reins at Oakridge. Walking into an established, successful restaurant meant putting aside some ambitions while Stone and Barrett learned the ropes. The Oakridge of 2015 was also a seven-day operation with multiple menus and a seasonal flux of tourists.

“It probably took one year just to get an understanding of what Oakridge was,” says Barrett. “There was a function menu, an à la carte menu, a tasting menu, this kind of menu after that kind of menu. It was overdone, complex and disjointed from the Yarra Valley. The ingredients weren’t local and were out of season. It’s in a tourist zone where restaurants get smashed with people. It’s hard to control quality.” 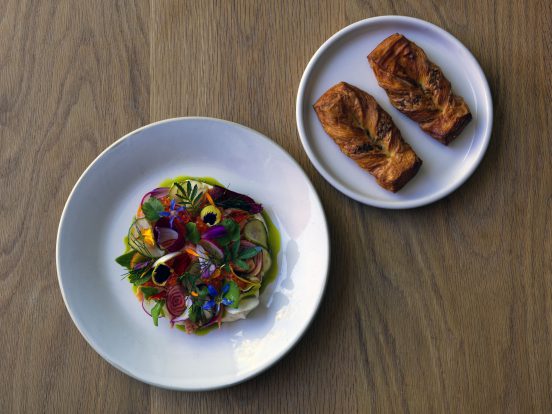 Four years on, Barrett and Stone have settled into a rhythm of sorts, overseeing a kitchen team of seven across five services a week. The small team packs a punch when it comes to skills. Everything from milling grains and baking bread to making cheese and charcuterie is done in-house. “We all believe cooking is making everything,” says Barrett. “I guess that’s the beauty of Oakridge. The team is really passionate and love cooking.”

The setup is not by accident or sheer luck — it’s the result of leadership that’s focused on development. “If someone is interested in fermenting, we’ll start getting some fermenting tanks in,” says Barrett. “We want to harbour that interest in everybody.”

From day one, the mindset has been ingrained in Barrett’s approach to cooking and she’s surrounded herself with like-minded chefs such as Stone. “From the start, we always milled our grains and made our own bread,” she says. “Even when it’s crazy busy or we’re understaffed, they’re just things we do.”

Even with shorter service hours than a city restaurant, juggling the number of projects underway at Oakridge can be a challenge, and Barrett is upfront about the cost. “When you’re teaching yourself, it usually [means] you stay back after work or you come in early,” she says. “As you get through it quicker you’ll introduce it to the prep list, [until then] everyone picks up the slack to allow that person to go through the process [of learning]. But they then teach the rest of us.”

Barrett and Stone are now ready to move the team to the next level. “We have so many projects we’d like to do,” says Barrett. “There are still things we’d love to do with the restaurant space and we’ve just started building our aquaponics system. “I wish we didn’t have to sleep. I mean, it’s exciting. Every day I look forward to going to work.”

With so much on the go at Oakridge, it’s unlikely Barrett has regrets about not opening the venue she and Stone originally planned. On the first day of her apprenticeship, the head chef posed  a question: “Do you want to own your own restaurant?” Barrett hesitated. “I said, ‘I’m not sure, I do know I want to be a head chef. I want to be cooking indigenous ingredients and local food from the region I’m in’. To be connected with our region, using only local food and a vast amount of indigenous ingredients is exactly what I wanted to be doing.”

Ultimately, Barrett’s ambitions are about what she can learn and what can be better — not accolades or awards. Her frustrations with the latter are perhaps Barrett’s only gripe with an industry she otherwise loves.

Social media and the rise of food festivals and events have made it easier to meet peers and share ideas. But opening up is a double-edged sword. “There’s always a bit of pressure,” says Barrett. “We had the Good Food Awards and hearing people’s reactions to what they got and what they didn’t get … it’s dangerous. People can live their lives by that stuff.”

Working in hospitality means sacrifice, especially if your values mean doing everything from scratch and constantly evolving — it’s vital to maintain perspective. “I really love what I do, so missing out on things is not a massive issue for me because I feel like I’m still winning.”