Don’t be left in the dark!

Join over 30,000 hospitality and foodservice professionals and sign up for Hospitality’s newsletter. Get news, business advice, interviews and videos delivered straight to your inbox

The 2019 edition of The World’s 50 Best Restaurants was slated to be unlike anything the industry had ever seen before. A host of new rules were ushered in to create a program that spruiked buzzwords including ‘gender-balanced’, ‘diversity’ and ‘inclusivity’. But was it really that different from the Euro-centric iterations of years gone by?

Hospitality was on the ground in Singapore to attend pre- and post- event press conferences, the 50 Best Talks — featuring our own Tetsuya Wakuda — and of course, the coveted awards ceremony.

The mania kicked off with 50 Best Talks which featured a panel discussion on the topic of kitchen karma with Daniela Soto-Innes, Eric Ripert, Ana Ros, Massimo Bottura and Tetsuya Wakuda. Some interesting topics were raised, with the most memorable revolving around the shift of kitchen culture from hostile to holistic along with gender and age equality.

Ripert kicked things off and recalled the days where he would yell and scream in his kitchen. “I emulated some of my mentors and I let myself be angry in the kitchen and I treated the cooks and staff poorly, screaming at them,” he said.

But the Le Bernardin chef decided to make a change and started studying Buddhism, meeting with a Tibetan monk once a week. “Every day I meditate and every day I study,” he said. “I try to absorb the teachings and take the messages I’m receiving and translate them into a secular message for the team. They seem to be responding well to the logic I’m sharing. I lead by example.”

On the topic of women in the industry, Ros recalled the countless conversations she’s had with young female chefs working in her kitchen who had told her they were planning on quitting cooking because they wanted to have children. Ros said she was met with shock and surprise when she told them “you can do it here”; proving flexible workplaces are few and far between in hospitality. 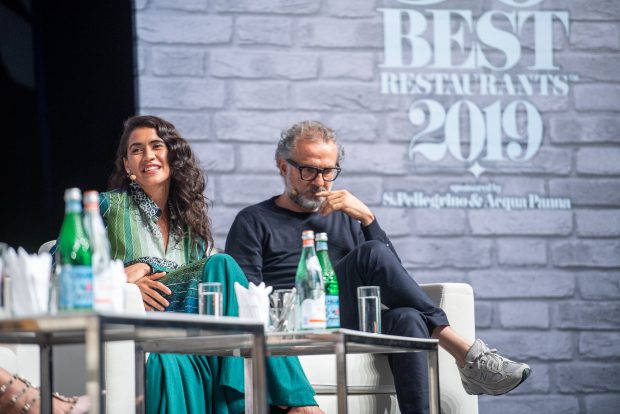 While Ros runs a restaurant that employs ‘older’ employees and encourages work–life balance, it’s not the norm in an industry fuelled by a churn and burn mentality. “[In] most kitchens, almost all the team [are] under 30,” she said. “It looks like there is an age limit for working in these kinds of kitchens.”

After the Hisa Franko chef won World’s Best Female Chef in 2017, she said a lot of the conversations she had with media revolved around gender in the industry, but stressed age is also a point of contention in the industry that impacts everyone. “How about equality of age?” she asked. “Show me a kitchen capable of having someone who is 45. We have a woman in the kitchen who is 55 and I look at her and say, ‘How the hell can I make this kitchen environment better for you because I want you to be here’.”

Soto-Innes was quick to jump in with the comment “I don’t think age matters”, which resulted in a debate between the two chefs. Soto-Innes, who was named 2019 Best Female Chef, said her New York restaurant Cosme has a team comprising 50 per cent of women over the age of 50, but Ros was quick to point out Cosme is a blue diamond in this instance. “I’m talking about people over 50 who want to retire with this job,” said Ros. “In Europe, it’s almost impossible. I can tell you that and I stand behind my words.”

All in all, an interesting conversation that reiterated the issues we are experiencing in Australia are very much present on a global level.

When William Reed announced Singapore would be the host city of The World’s 50 Best Restaurants, the move received high praise from the global culinary community.

Not only did it mark the first time the ceremony and its associated events would be held in Asia, but it heralded a new beginning for the program.

Reed said Singapore was “an appropriate setting” for the awards given its culinary landscape covering everything from “hawker to fine dining favourites” and described the 2019 awards as the “most extensive ever”, with each of the 50 restaurants on the list represented at the ceremony.

Arora, who was named Asia’s Best Female Chef in 2019, echoed the sentiment, and said hosting the ceremony in Asia was a much-needed change. “The focus has moved to this part of the world,” said the chef.

Humm is one of now seven inductees, and said the program allowed a greater number of restaurants to have a shot at making the top rankings given the usual suspects are out of the picture. “With these changes, we’ll see a broader field of restaurants and chefs step onto the international stage and it’s humbling to be able to contribute to that transformation,” he said.

“Food is all about community and expanding that will only strengthen our impact.” In the lead up to the event, Time ran a piece which suggested the Best of the Best was a program spearheaded by a group of high-profile chefs, including Massimo Bottura, who voiced concerns over ‘drops’ in the list and the effects they experienced personally and professionally, e.g. loss of status among peers and declines in bookings. However, World’s 50 Best Group Editor William Drew said that while William Reed had consulted with chefs, the Best of the Best had been in the works for some time.

The awards ceremony was held at the Marina Bay Sands Singapore, with hoards of chefs and restaurateurs donning their red scarves in anticipation for the new no.1.

In honour of main sponsor S.Pellegrino’s 120st anniversary, the program extended the list from 50 to 120 for the first time, with an additional 70 restaurants ranked. The extended list was especially newsworthy for Australians, who arguably saw two of our top restaurants, Brae and Attica, clock in at 101 and 84 respectively.

Both restaurants experienced significant drops compared to 2018, which led many to believe Peter Gilmore’s Quay — which ranked in at 95 in 2017 and was excluded last year due to its closure — or Jock Zonfrillo’s Orana would make an appearance.

But as the list ticked over, it became apparent there would be no Australian restaurants on the list. How could this be? Australia’s culinary scene is up there with the best which leads to the most logical reason — we’re simply too far away for judges and voters. A trip Down Under is unfortunately a long one. Here’s hoping we have better luck next year and the airfares continue to drop.

Overall, 26 countries made up the top 50 with France’s Mirazur — which also secured three Michelin stars earlier in the year — snagging the no.1 position.

It marked the first time a restaurant in France topped the list, and was especially noteworthy as it is run by a non-French chef; Mauro Colagreco is of Argentinean and Italian background. 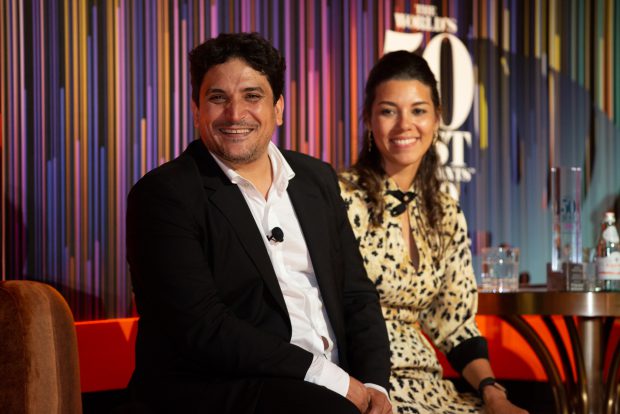 Colagreco described the win as a dream during the post-event press conference, and reflected on how far he has come in 13 years when he started with a team of three in the kitchen and two on the floor. “We know how hard everybody has worked so I’m happy,” he said.

When asked how he felt about Mirazur being named as the number one restaurant in the world in front of his peers, he used the word pressure. “It’s so nice, but it’s a big responsibility,” he said. “I worked for [chefs like] Alain Ducasse — all these chefs inspire me a lot. I will never forget [this] in my life.”

Controversially, Noma (Copenhagen) ranked in at number two and was also the highest new entry followed by Asador Etxebarri (Spain), Gaggan (Thailand) and Geranium (Copenhagen). Spain had the highest number of restaurants in the top 50 with a total of seven with the US coming in at six and France coming in at five.

Mexico (Pujol, no.12; Quintonil, no.24) and South America were also prominent in the list, with restaurants from Colombia (Leo, no.49); Peru (Central, no.6; Maido, no.10); Brazil (A Casa do Porco, no.39); Chile (Borago, no.26) and Argentina (Don Julio, no.34) all ranking in. There were a total of 12 new entries, meaning the majority of the list comprised return restaurants.

While the 2019 edition of The World’s 50 Best Restaurants promised big things around gender equality, the program missed the mark. There were only five restaurants with female chefs in the top 50 — the same as 2018, and while the presence of restaurants in South America (six) and Asia (seven) was promising, 26 of the top 50 are based in Europe.

This story originally appeared in the August issue of Hospitality magazine. Subscribe here.