These producers are the future of Australian pork

Pork is a favourite for consumers and chefs alike. The versatile protein can be processed into a number of products from fresh pork to ham, bacon and a plethora of charcuterie and smallgoods. In 2015–2016, the local pork industry contributed more than $5.2 billion to Australia’s GDP and it supports more than 36,000 full-time equivalent jobs. All in all, it’s a valuable sector — and that’s despite the challenges it faces from international competition.

Hospitality talks to two of the country’s leading pork producers, Blantyre Farms’ Edwina Beveridge and Western Plains Pork’s Judy Croagh, and Australian Pork’s General Manager Peter Haydon about the practices that make our homegrown pigs worthy of more market share. The majority of people don’t know where their pork is from. According to Haydon, the level of awareness varies. There’s a 50 per cent chance the local butcher who’s been in the trade for 20-plus years knows if the bacon they’re slinging is made from imported meat. The lack of knowledge can be forgiven.

While processed goods can be legally imported, all fresh pork sold here must be produced in Australia. Vague country of origin labelling in supermarkets only compounds the confusion. On top of that, there are no mandatory labelling laws for restaurant menus. The pile of bacon served with a big breakfast at the neighbourhood cafe? It can come from anywhere. So too can the prosciutto that costs upwards of $14 per hundred grams.

The reality is more than 80 per cent of the ham and bacon sold in Australia is imported. As of March 2018, 3.1 million kilograms of imported pork arrives in the country each week; that’s $12.96 million worth of pork products.

Unsurprisingly, Australian producers want a slice of the pie. 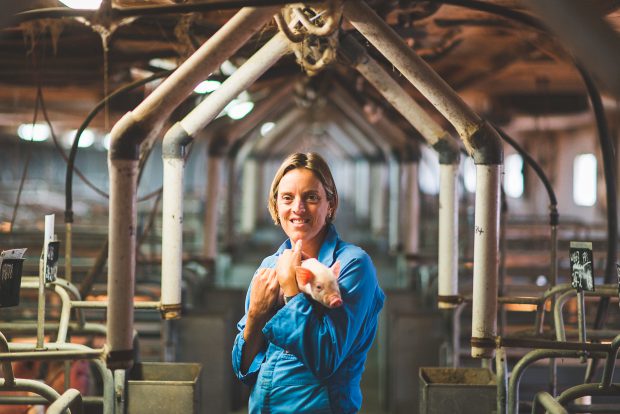 For the most part, there’s one reason imported products such as ham and bacon have come to dominate the domestic market — they’re cheaper. Australian pork tends to be more expensive for a number of reasons, all of them worthy of the higher cost.

To begin with, the quality tends to be better. “Australian pork, whether it’s ham or bacon or fresh, comes from around the corner,” says Haydon. “It doesn’t need to be frozen for weeks or potentially months.”

There’s also an opportunity for smallgoods suppliers or restaurants keen to produce their own charcuterie to work directly with farmers.

Croagh has worked closely with restaurants since 2000, developing relationships with chefs around Victoria. Now, Western Plains Pork supplies Salt Kitchen Charcuterie with female pigs grown in a dedicated paddock to a specific size especially for the providore. The partnership means Salt Kitchen Charcuterie is able to procure pigs that are more than double the normal weight with more muscle and a higher fat content. “They’re [also] outside working their muscles a bit more, which is good for charcuterie,” explains Croagh.

These relationships are mutually beneficial, and not just in terms of quality. “Australian outlets are much more important to Australian pork farmers than overseas outlets,” says Haydon. “We don’t export much, so certainty of supply is much higher if you have a relationship with an Australian producer.” 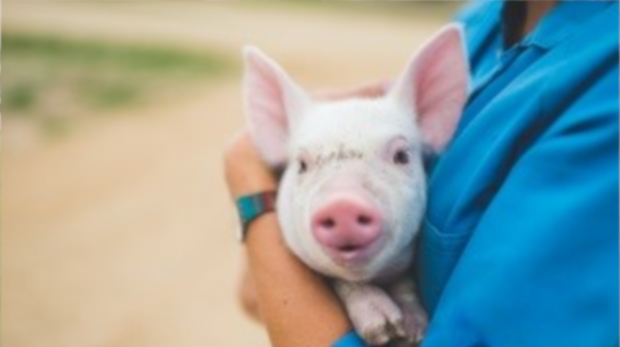 Blantyre Farms produces an impressive number of animals. With 2000 sow piggery, there are between 22,000–23,000 pigs on-site at any one time. “Most of it goes into fresh pork because the overseas market can produce [processed goods] cheaper than us,” says Beveridge.

Provenance has become a pivotal selling point, with diners increasingly interested in the treatment of animals and the environment. Haydon admits quality is a key driver when it comes to consumer choice, but benefits for animal welfare and the environment can impact decision-making.

“Average consumers don’t choose stuff just for [provenance],” he says. “It’s got to taste great and be good value for money. But if you’ve got quality, an innovative farmer, an environmental benefit and a welfare benefit, then you’ve got a really powerful provenance story.”

People can enjoy what they’re eating and feel good about it — most are happy to pay for that experience. 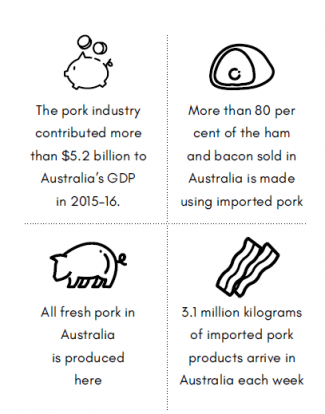 Australia has strict laws regulating the treatment of animals. The Model Code of Practice for the Welfare of Animals (2007) — Pigs (the Code), developed in consultation with all levels of industry as well as regulators, RSPCA and scientists outlines the responsibilities involved in caring for pigs. It covers everything from their housing, food and water to special needs.

The majority of Australian pig farmers voluntarily work to standards higher than those required by law, which accounts for more than 80 per cent of pigs, no matter the farming system they’re raised under. The indoor, outdoor bred and free-range systems all rely on the husbandry skills of the producer and stock handler to ensure the welfare of pigs.

Blantyre Farms, which houses all of their pigs indoors, has a “little bit more” technology than most farmers, according to Beveridge. “The sheds have insulated walls and ceilings that keep the room warm in winter and cool in summer,” she says. “They have automatically ventilated blinds that run the full length of the sheds. If the thermostat says it’s getting too warm, they’ll open up to let air in; if it’s too cold, they close up.”

The sheds are quite open with a limited number of pens. “[Pigs] might be in a pen with 200 others and they have room to run around,” says Beveridge. “I’m very comfortable with having them indoors. The pigs are protected from the elements, but they’ve got fresh air. We can also control the effluent.”

Slatted flooring allows manure to drop through the floor, which keeps the pens — and the pigs — clean.

For Croagh, the decision to operate under an outdoor bred system was personal. “All our breeding stock live

outside,” she says. “The piglets are born outside and then move into eco shelters. I think it’s a nice environment.”

Although the animals are free to move around outside, the eco shelters offer protection when needed. Essentially, the pigs are able to act on instinct. “This time of year, when it’s really wet and cold, they like to stay inside,” says Croagh.

An outdoor bred system doesn’t mean an absence of tech or intervention, though. “It’s an intensive system,” says Croagh. “We have a lot of people working here and the stock are checked all the time. We have automatic feeders in the pre-sowing.” 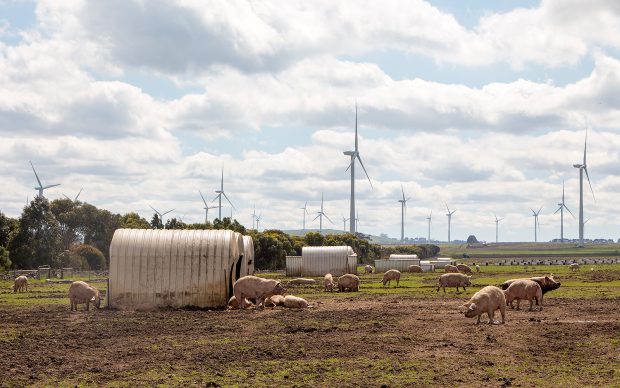 Beveridge also makes use of automatic feeding technology. “The pigs have food and water in front of them constantly,” she says. “Most of that is computer controlled, so you can dial into it and see that it’s working.”

The use of feeding technology offers producers the opportunity to maintain their stock’s health through a closely controlled diet. Automation means pigs have access to food and water whenever they want, while nutritionists make sure their diets are balanced.

Currently, the industry is working to meet an on-farm goal of 1 kilogram CO2 (equivalent) per kilogram of pork produced. One way Blantyre Farms is mitigating their impact — and the impact of our food system at large — is through the use of food waste products. Beveridge says they redirected 13,500 tonnes of food waste into feed for the pigs last year. “All those products could have ended up in landfill, creating methane gas,” she says.

The ability to collect all the effluent does more than keep the animals clean, it’s supported progress when it comes to mitigating environmental impacts. The manure is channelled into a 15-megalitre dam, where the biogas released by the effluent is captured and refined into methane that is then used to run generators that power the farm.

While it can be difficult for outside bred and free-range systems to collect manure like this, Western Plains has developed a nine-year paddock lifestyle system, resulting in a different but equally as positive impact on the environment. Pigs are regularly rotated to new paddocks, preventing the build-up of any nutrients that could compromise the water table.

“[Our breeding stock] will start in one location and will be set up there for two to three years, then we soil test and they’re moved to a fresh site,” says Croagh. “Then the farmer — we lease a lot of land as well — comes in and crops, utilising all the nutrients the pigs have left behind. It can be sustainable within the whole farm plan.” 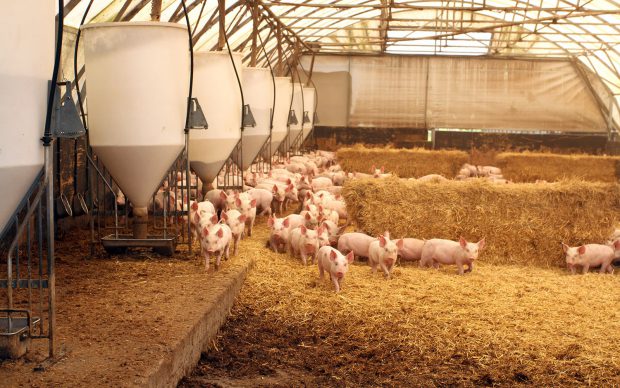 Manure is also collected from open-ended straw huts that house piglets once they are weaned, which is left to compost before being spread out onto the paddocks. Worthwhile as they are, practices such as those followed at Blantyre Farms and Western Plains mean Australian pork is often more expensive than imported products. But, as Haydon puts it, the decrease in margins might not be as diabolical as it seems, particularly when it comes to processed goods. “There’s typically not that much ham or bacon in a meal,” he says.

A 20 per cent premium for Australian pork products, he explains, will mostly likely lead to the need for just a 4 per cent bump in menu prices. And if it’s good for diners, pigs and the environment alike, buying Australian pork is worth a potentially small increase to costs.