The perks of being a dog-friendly venue

In a world where dogs are considered family members, it’s only fair they enjoy the same creature comforts we do.

Whether it’s a Sunday session at the pub or a morning coffee at a café, dogs have become the companion of choice for many.

But there are a few points to consider before you welcome pooches into your venue. Hospitality talks to The Vic on the Park General Manager Cameron Hann and Old Man Drew Owner Dorothy Leech about what it takes to get your premises dog-ready.

Australia is an animal-loving nation, with the RSPCA estimating there are more than 24 million pets in our country alone. Research shows dogs are the most popular, with 38 per cent of households owning a pooch, equating to 20 dogs per 100 people.

It doesn’t take a genius to do the math. Dog-loving people = a major business opportunity. Not just from the perspective of customers choosing your venue because they can bring their dog, but from a dollar perspective. Hello, dog menus.

But there are a few rules to get straight before we dive into dog territory; the first revolves around where dogs can and cannot go.

In the Safe Food Australia Guide under Standard 3.2.2 — Food Safety Practices and General Requirements, only certain animals are allowed in food premises such as assistance animals, who must be allowed in any area used by customers such as dining and drinking spaces.

Live animals (other than seafood, fish or shellfish) are not permitted in areas where food is handled. However, pet dogs ‘may’ be allowed in outdoor dining areas that are not enclosed at the discretion of the business owner.

Of course, venues must maintain high standards of food safety and hygiene to ensure animals do not contaminate food.

Now the housekeeping is out of the way, it’s time to talk about the benefits of allowing dogs in your venue — just ask Dorothy Leech from Old Man Drew, a café located in Ascot Vale, Melbourne.

Leech is the proud owner of Frankie, a Chihuahua, who she says was the motivation behind making the café dog-friendly. “From day one, it was our plan,” she says. “We’ve always had dogs and it’s been hard to find somewhere comfortable to go.”

Old Man Drew is a unique property full of nooks, which isn’t a surprise given its past life as a used trucks store run by Leech’s grandfather. While the interior encompasses a series of rooms, the outdoor space is sprawling, “at least 200 square metres,” says Leech. Thanks to the size of the garden, the café is able to section off areas and create spaces for dog owners and customers who would rather steer clear of pets. The garden also has a separate side entrance, which means dog owners don’t need to walk through the indoor space.

Leech says word has spread fast and the café is attracting more and more customers since it opened in November last year. “We were included in an article about dog-friendly cafés and people are starting to find us because of the dogs,” she says. It’s not hard to see why Old Man Drew is an attraction for customers. The café has rugs and dog beds throughout the garden and even a water station for pups. 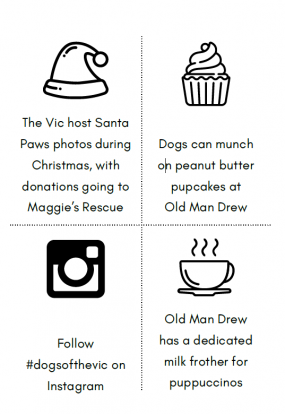 Cameron Hann says The Vic has been dog-friendly for as long as he can remember. When Merivale acquired the Marrickville venue in 2017, the previous licencees’ pension for pooches remained.

Hann says it’s a no-brainer for a pub in Sydney’s Inner West to welcome dogs, and says the allowance facilitates a family atmosphere. “Who doesn’t like dogs?” he says. “You want the local pub to be a reflection of the community, and if you can bring your dog, it feels like your whole family is there.”

Like Old Man Drew, The Vic has a large outdoor space with a deck area and a basketball court which is where you’ll find dogs and their owners. “Some people come here every day with their dogs for a meal or to come and play basketball,” says Hann. “There’s enough space for lots of dogs to come and go.”

Venue owners know dogs aren’t allowed indoors, but some consumers are unaware, which means educating customers is on you. Most dog-friendly venues are easygoing when it comes to having dogs on the property, but there are some basic rules that are important to communicate. “We have a sign in our window which says dogs are welcome but to take them around the side gate,” says Leech. “Most people come around the side — it’s only a small number who tie their dog outside and ask if they can bring the dog through.”

Old Man Drew doesn’t require dogs to be muzzled and says most owners are aware of their dog’s behaviour. “They know their animal and are conscious,” says Leech. “There’s only been one dog who was disturbed, but once we put him in the veggie garden, he calmed down.”

Dogs are required to be on a leash at The Vic which Hann says is important to help create a stress-free environment for everyone. “It’s not fair for some to be on the leash and others aren’t. Not everyone loves dogs, so people need to be respectful. We have a couple of signs that say dogs have to be on leashes and with their owners at all times.”

Hann says it’s inevitable scuffles will break out, especially when there are a lot of dogs around, but stresses “99 per cent of owners are responsible, aware and react accordingly. We have more issues with people than dogs.”

There’s also the issue of cleaning up any accidents. Leech says they are a rare occurrence, but the café is well equipped with a pressure washer. The Vic also provides the necessary tools for owners to clean up any messes. 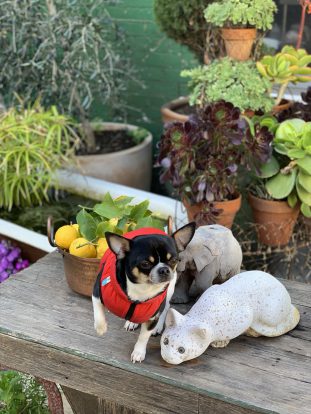 Most people can’t hold themselves back when a cute puppy arrives, so it’s inevitable staff will have some form of contact with dogs during a shift.

Old Man Drew have a health and safety officer on-site and a chef undertaking a degree in animals, so the team are well aware of the requirements. During induction, staff are told they must wash their hands after they have touched dogs and reminder emails have been sent out over the café’s 11-month life.

The garden area has a separate water station, which means workers don’t have to go into the bathroom to wash their hands. “There are two water stations with hot water, soap, towels and hand sanitiser,” says Leech. There’s also a sign in the locker room area which encourages staff to regularly wash their hands.

Same goes at The Vic. “Staff mostly enjoy the dogs as much as the customers, but they have to keep their hands washed,” says Hann.

We all know there are plenty of dog fanatics out there; just take a look at the number of products on the market. And the types of people who will buy a customised collar for their pup will most likely splash out on some doggy treats at your venue.

The Vic sources organic dog treats from West Juliett café down the road, but they don’t charge. “If people want a snack for their pooch, we will happily hand them out,” says Hann. However, the pub is working on some upcoming community events in the carpark and a doggy fashion show is a definite potential.

Old Man Drew are set to expand their dog treats offering from complimentary dog biscuits and pupcakes to a more substantial menu. “Some people want to buy them because they love them so much, so we’ve been considering a dog menu, which I think we will do for summer,” says Leech. “We’re planning on putting a dog food bar in the garden and we will do plates of meat and rice that are attached to our menu. They won’t be overly expensive, just something for them to eat while everyone else is enjoying a coffee and the sun.”

The consensus is in — dogs are good for business. According to Leech and Hann, dogs can help create an inclusive venue that encourages good vibes all round. You’d be barking mad not to be dog-friendly.