Mark Best charts his experience on Netflix’s The Final Table

Mark Best talks international fandom, being part of a new school of competitive culinary programming and why The Final Table was one of the greatest experiences of his career so far.

When Netflix announced The Final Table in August 2018, the streaming platform described it as “a global culinary competition show featuring the world’s most renowned chefs”. With two MasterChef US producers at the helm, a Michelin-studded cast, a live studio audience and a stadium-esque film set, The Final Table intended to blow your average cooking show out of the water.

However, the show received mixed reviews after its debut last November. The Guardian’s Stuart Heritage acknowledged the calibre of the 24 chefs and posed the following question: “Why did they agree to this? If you already run one of the 50 best restaurants in the world, then what on earth do you stand to gain … ?”

For Mark Best, the answer is simple. “We understood as soon as we saw the other contestants,” says the chef. “The producers themselves had some serious runs on the board and the production values were going to be higher than anything that had been out before in terms of the format.”

When fellow Australian chef Shane Osborn told Best about the show, his initial reaction was “cynicism” — the self-described approach he applies to everything. But scepticism quickly turned into something else. Best had recently closed his Sydney restaurant Marque at the time and had nothing to lose, plus, being asked to team up with Osborn was a huge compliment. “Shane could have asked anyone, on a personal level, it was gratifying,” says Best. 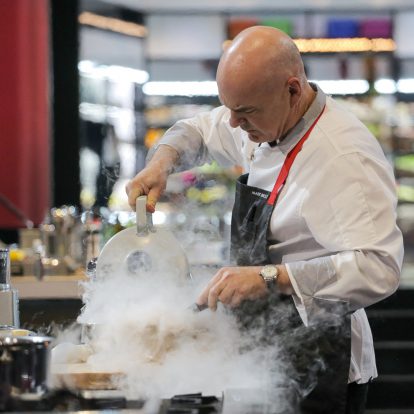 Information was scarce during initial conversations about The Final Table, and when the casting process kicked off, it was gruelling and time-consuming, taking close to one year. “We didn’t get too excited because it was so drawn out,” says Best. “There were interviews, Skype interviews, psych profiles, licence checks and federal police checks. I had to provide financial information and all sorts of stuff — I could have joined ASIO after.”

Best and Osborn travelled to Los Angeles for the next round of casting along with hundreds of other hopefuls. Showbiz is cut-throat, and so was the culling of potential contestants. “Once you had gone through the process, very few were selected,” says Best. “Half of the chefs that went to LA were sent home straight away.”

The pair continued to progress until they were selected to participate in the show, joining 12 teams of two chefs from countries including New Zealand, India, the US, Brazil, Ecuador, France, Japan and more.

The 10-episode series was filmed at Sony Studios in Los Angeles over a seven-week period, which is a substantial amount of time for chefs to be away from their businesses. After the closure of Marque, Best wasn’t conflicted work-wise, but had to consider the business and financial repercussions of being out of action for nearly two months. “We weren’t being paid, so income was a consideration, obviously,” he says. “But I thought this was as big as it was going to get in terms of that type of thing so I just went for it — I couldn’t really see any downside.”

So how does one prepare for a stint on a competitive cooking show, let alone one that features some of the world’s best chefs? Well, if you’re at the top of your game, the answer is your career. “I hadn’t been involved in [something on] that scale or filmed in Hollywood at Sony Studios, but working in restaurants and doing the types of events I’ve done prepared me professionally for whatever they might throw at me,” says Best.

The contestants weren’t given much information about what the challenges would entail, but they did know it would be international — aka everything was on the cards. Each episode revolved around the recreation of a national dish from nine countries including Italy (pasta), Mexico (tacos), Spain (paella) and the US (Thanksgiving dinner). A revolving panel of judges — including a food critic and two individuals with personal connections to the region — determined the best and worst dishes. The three teams with the lowest-scoring dishes cooked again in the Final Plate challenge showcasing a native ingredient selected by the episode’s guest judge.

It’s hard to name Australia’s national dish (salt and pepper squid, sausage sanga?) so the country’s exclusion was expected. But a number of contestants had an advantage if they were still in the competition when their home country’s cuisine came up. Best and Osborn remained undeterred, and kept a cool, calm and collected composure. “You don’t know what you don’t know and you just roll with it,” says Best. “The advantage swung back and forth depending on what was your wheelhouse.” 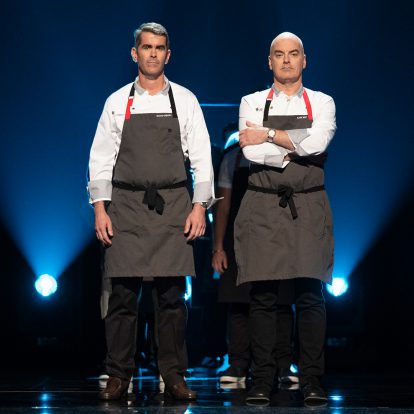 Each episode follows the same format and producers were strict when it came to the time restrictions, which varied from 60 minutes all the way up to 90 minutes depending on the challenge. When asked how he dealt with cooking under a time crunch, Best compares the challenges to some of the most intense experiences he’s had in the kitchen. “It was the hardest service you’d ever done and the most amount of pressure,” he says. “Shane and I pushed ourselves to the limit to come up with quality dishes that fit the criteria,” says Best. “And then there were mysterious things I’ve never worked with like whole cassava and nopales [cactus leaves]. Professionally, we just had to use [our] skills to work with things we weren’t familiar with to decode them and turn them into something edible.”

Best and Osborn made it to the grand final alongside Timothy Hollingsworth and Darren MacLean. The teams were split for the first and only time, with each chef cooking a career-defining dish in front of nine culinary legends including Grant Achatz, Clare Smyth and Vineet Bhatia.

Best decided to take a risk and create a dish that combined the diversity of Sydney with his experience on the show, which he described as a “cultural schooling”. Best plated up drunken squab with slow-cooked abalone, huitlacoche (an ingredient he had never tasted before the Mexico episode), Australian black truffle and sweet onion and mirin. Judges described it as “daring”, “harmonious”, “bold” and “audacious”, but in the end, Hollingsworth was awarded a seat at The Final Table for his black cod, one of the first dishes he put on the menu of his restaurant, Otium. Best says the judging was fair, but questions were raised by the culinary legends and the public regarding the weight of risk-taking versus cooking what you know. “I think I was robbed in the end, but Tim was a worthy winner,” says Best. “I was in it to win it.”

The Final Table wrapped filming in 2017 and hit our screens one year later, giving the 24 competitors some downtime before fandom well and truly hit. Best says the magnitude of The Final Table set in after his social media channels skyrocketed, with the chef now boasting more than 77,000 followers on Instagram and an impressive bounty of fan art.

Best is one of Australia’s finest chefs and has achieved a new level of culinary greatness on the global platform that is The Final Table. The chef has nothing but good things to say about the show and his portrayal — including his “savage resting bitch face”, a commonality chef and author both share. “It showed professional people working their absolute hardest,” says Best. “I think people resonated with watching people at the peak of their craft and knuckling down without all the bullshit. It was one of the greatest experiences of my professional career.”