Restaurant’s Lume’s Jose Lorenzo Morales has been named as the winner of the Pacific regional final for the S.Pellegrino Young Chef competition.

Lorenzo Morales received the award in front of his fellow competitors and peers at an awards ceremony held at est. in Sydney last night.

“I want to restore our ancestors’ practices that reflect Filipino traditions, to inspire locals not to forget our history. I applied techniques that extend from the north to the south of the Philippines in a cohesive manner, not to express sophistication, but an appreciation for a cultural legacy that deserves an identity.” 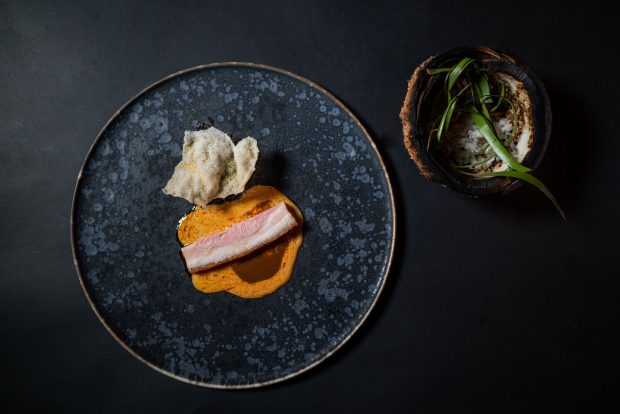 Judges Peter Gilmore, Christine Manfield, Dan Hunter, Danielle Alvarez and Jock Zonfrillo were impressed by Lorenzo Morales’ execution of the dish and attended the cook-off held earlier in the day at the Sydney Seafood School, observing the 10 semi-finalists and tasting their dishes.

In addition to the top honour, S.Pellegrino awarded three additional titles during the evening.

Abhijit Dey from SO Auckland took out the Fine Dining Lovers Food for Thought Award, with Kezia Kristel from Icebergs receiving the S.Pellegrino Award for Social Responsibility. Igni’s James Bond-Kennedy was awarded the Acqua Panna Connection in Gastronomy title.

Melbourne-based Lorenzo Morales will travel to Milan in 2020 to compete against 11 chefs from across the globe for the title of Young Chef 2020. He will be joined by his mentor and previous winner of the Pacific region John Rivera, who ranked in at no.5 at the global finale in 2018. Kristel, Bond-Kennedy and De will also attend the finale.

Hospitality was on the ground at the cook-off and spoke to Christine Manfield, who was happy to see an increase of female representation (there were three finalists) and commented on the importance of provenance.

“I’m curious about the provenance of their produce and some stand out more than others,” said Manfield. “It’s really about trying to ascertain their comfort level … How long it’s taken them to develop their recipes, how they’ve refined it over time.”

Danielle Alvarez echoed the produce-focused sentiment, and said the judges paid particular attention to the story behind the dishes.

“I think the judging panel is focusing on quality of product first and foremost, so I think we’re all looking around at what the produce looks like and why the chef has chosen that particular ingredient,” she said. “They’re all talking about sustainability and zero waste, and that’s really excellent.”

Lorenzo Morales will have around nine months to perfect his dish with the help of Lume executive chef John Rivera, who spoke to Hospitality about the opportunities the competition provided him with and his new role as a mentor.

“I know how important this can be for young chefs,” he said. “After I won and went to Milan, it opened up a lot of opportunities and inspired a lot of young Filipino cooks to go and pursue their own cuisine, their culture and their own interpretation of their culture,” he said.

“Jose was working for me already at Lume, and he said he wanted to do it. It felt right that I would mentor him — I’ve been here before and I really wanted to help him find his own style of Filipino-Australian cuisine.”

The Pacific region was the first to hold its regional final, with the remaining 11 regions to follow in the coming months.