If you run a café, chances are you have a plethora of milk options on offer. Whether you sell more full-fat flat whites or lattes teamed with almond, coconut or oat milk, providing non-dairy alternatives can help attract more customers.

Research in IBISWorld’s Soy and Almond Milk Production in Australia has shed new light on soy and almond milk production on home soil, confirming the industry is currently worth a staggering $237.1 million, with revenue increasing at an annualised 8.3 per cent through 2019-20. 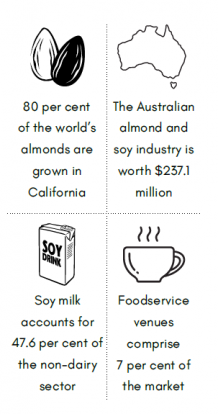 So what’s behind the rise? A combination of a health-conscious population, retail prices, reputation and brand recognition. Soy is still the most popular non-dairy beverage sitting at 47.6 per cent, which is most likely due to its long-standing market presence, but almond milk is quickly edging closer at 44.2 per cent.

Rice milk (3.6 per cent), coconut milk (3.3 per cent) and other milks such as hemp and oat (1.3 per cent) form smaller parts of the market, but are expected to grow in the next five years due to the introduction of new suppliers. On the flip side, the research predicted there would be a lack of new entries into the soy market due to market saturation.

Foodservice venues make up a relatively small part of the soy and almond milk market at just 7 per cent, but the figure is most likely under-stated as many operators purchase products through wholesalers, which represent 28.7 per cent of the market.

There’s no denying the industry is in the growth stage of its lifecycle, so now is the perfect time to think about introducing a range of non-dairy options to your venue.