Pinotta: The little pasta bar that could

Cian Fenaughty is just 28 years old, but the chef has already worked at bucketlist restaurants from Dinner by Heston Blumenthal in London to Cutler & Co. and Sunda in Melbourne. Starred, buzzy restaurants are the pinnacle for most chefs, but Fenaughty was more interested in being part of a venue that was a hub for the community.

Recently taking on the role of head chef at Fitzroy North pasta bar Pinotta, Fenaughty talks to Hospitality about bugging HR to get a trial at Dinner, lessons learned from Andrew McConnell and what goes into creating a restaurant for regulars.

Like most budding chefs, Cian Fenaughty completed his apprenticeship at a pub. Unlike most chefs, he flew to the UK for a trial at Dinner by Heston in London shortly after. While Fenaughty had limited experience in the kitchen (the pub teamed with a stint at Andrew McConnell’s Cumulus) he had the persistence to get the green light. “It wasn’t the usual application process where you emailed the chef; you were bugging the HR department of a hotel,” says Fenaughty. “I ended up calling a few times and finally got a trial.”

The chef passed the test, but didn’t have his foot in the door just yet — he was put on a waiting list. Alas, the trip across the world paid off when he was offered a job at the restaurant, which was just five months old at the time. What followed can be described as frenetic — or whatever other word you’d use to describe working at a Blumenthal-run establishment. “I was there with 48–52 other chefs and there was so much nervous energy,” says Fenaughty. “It was a high-volume, consistent restaurant.”

Working at Dinner was certainly a departure from the pub, and the way the kitchen was run was a revelation that would stay with Fenaughty from that point onwards. “Everything was questioned, whether it was cooking techniques or the way you stored things,” he says. “They had an incredible way of instilling systems that stuck and an attitude of always doing better.”

The experience also encouraged Fenaughty to take personal responsibility, which sometimes resulted in some serious boundary pushing — personally and professionally. “I had some of the hardest services of my life and some of the most rewarding,” he says. “Consistency was everything and nothing would make it out that wasn’t good enough.”

After he wrapped up his time in London, Fenaughty returned to Melbourne where he found himself back in the McConnell fold; this time at Cutler & Co. It was supposed to be a limited run as there were plans in the works to move to South Africa to open a restaurant with a Dinner colleague, but “it fell through,” says Fenaughty. “It all got a bit hard with visas.”

Instead of dealing with the chaos of launching a restaurant — let alone one in another country — Fenaughty put his head down at Cutler and took full advantage of the opportunities that come with working for Andrew McConnell. Attending off-site training programs and seminars are a key part of staff development within the group, and Fenaughty says preparing workers for the next step made the jump from sous chef to head chef a few years later a much easier transition. “They were really good at developing people for the role above and they do off-site training and seminars with people who work in hospitality,” he says. 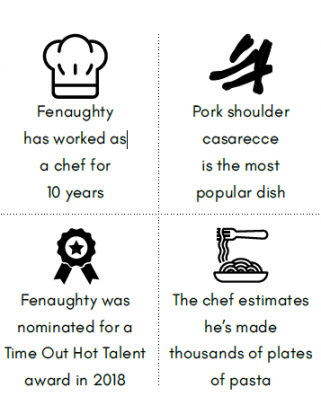 There were also plenty of on-the-job opportunities where Fenaughty, then a sous chef, would cover for a head chef if they were away. Spending time with his superiors was another invaluable learning opportunity. “A lot of it is one-on-one with mentors who are very clear on what the restaurant expects of you and the role,” he says. “Sometimes the feedback was difficult to receive, but the path was set out for you and the development was straightforward. That level of honesty and clarity is something I use today and I understand how powerful it is to lead by example.”

Fenaughty left Cutler to work with chef Chris Watson at the Luxembourg in St Kilda for two years before a role came up at Khanh Nguyen’s Sunda Dining. The chef spent six months at the South East Asian restaurant and says he discovered more about cooking in that period than he had in a while. “Learning new ingredients, recipes and techniques was easily my favourite part,” he says. But Fenaughty’s heart just wasn’t in it. “After working in a community restaurant like the Luxembourg, I wasn’t 100 per cent set on going back to the city. Sunda was challenging, but it wasn’t right. I’d dream of pasta, wake up and write down three dishes and go to work and cook rice.”

The pasta restaurant of Fenaughty’s dreams already existed in the form of Pinotta. Owner Heidi Modra was on the lookout for a new head chef to run the eight-year-old restaurant and Fenaughty had an in through a friend of a friend working at the venue. The job was his — but turbulent times were en route. “Some of the team left when I started, which is the norm for kitchens,” he says. The dropouts meant Fenaughty had to find a sous chef and hire commis he had never worked with before.

Building a team from scratch is tough, but it also provides an opportunity to start from square one. Like most chefs, Fenaughty struggled to establish work–life balance in the past and has experienced the downside of putting the kitchen first. “I’ve lost friends and partners from work and alienated family,” he says. “Losing my partner was a big thing — I don’t want to disappoint anyone like that again.”

The chef says controlling the roster at Pinotta is empowering, and providing his team with enough time off is a priority. “I don’t want them to choose between work and loved ones,” says Fenaughty. There was also the challenge of coming into a restaurant that’s been around for eight years, especially a neighbourhood spot crammed full of locals. Fenaughty was mindful of not rocking the boat too much when he started and says his first menu was similar to what was going on before.

“The menu was pretty much what I wanted to do — a local pasta bar that works with local producers — so it was already heading in the direction I wanted to go in.” A few months down and the menu has completely changed — bar the tiramisu: “I can’t take that off,” laughs Fenaughty. “The menu is quite basic, but it’s about nailing the cooking and putting in work behind the scenes,” he says. Diners are now inhaling dishes from pappardelle with braised duck, burnt raddichio and pine to fior di latte cappeletti with nettle and spigarello.

The restaurant is also hosting more events with guest chefs popping in for one-off menus. Cutler & Co. alum and Lesa chef Allan Eccles recently stepped into the kitchen for a long Sunday lunch and Chris Watson was in Fenaughty’s domain for a ‘Mexitalian’ barbecue. “I’ve been pushing to have more friends come in and cook,” says Fenaughty. “I think it brings in new guests and people that follow these chefs throughout their careers.”

While the menu has come into its own, the neighbourhood vibes Pinotta is known for remain very much the same. Maintaining an accessible image is front and centre for the restaurant, which prides itself on being a community hub. “Heidi is an incredible host and regulars turn into friends — it’s an amazing atmosphere,” says Fenaughty. “That level of repeat clientele only exists when you create a special place for people to go to.”