Navigating a pandemic in Hong Kong

There are rumbles of an impending reopening date for Australian venues beyond the Northern Territory — and the green light couldn’t come soon enough.

It will be far from ‘normal’; strict social distancing practices will remain in place as well as increased hygiene protocols and the rollout of new procedures — where do operators begin?

Looking to international peers is a start. These are the operators who are leading the charge on what running a business in a pandemic looks like, with safety at the core of each and every move.

While life for Australian restaurant owners has strictly revolved around delivery and takeaway for months, venues in Hong Kong have remained open. So how have they been able to do it? By upping the ante on all fronts.

Venues in Hong Kong must adhere to government regulations which require customers to fill out a health declaration form to confirm they have not tested positive for COVID-19, been outside the country or had direct contact with a known case within 14 days, among other points.

“Establishments are using these forms to protect everyone that enters the premise,” says Jang. “We keep ours for 21 days on-premise. If someone was to get sick, we would be able to let everyone that was in the space that day know that they may be at risk.” 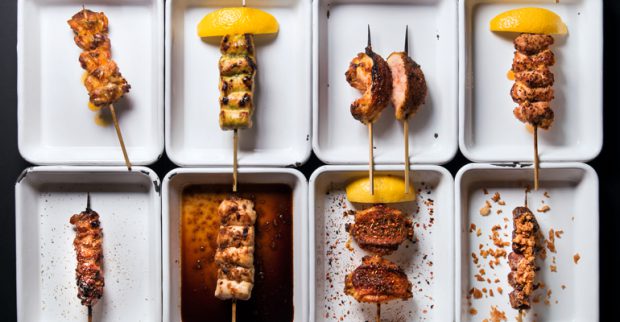 Jang says most customers have been “extremely understanding” and safety is naturally front of mind for most people who choose to eat at a restaurant.

Nonetheless, staff have been trained to deal with the occasional disruptor. “We’ve had a handful who don’t want to abide by the rules and we gently ask them to leave,” she says. “These times require adherence to the rules, anyone who doesn’t comply is putting everyone at risk.”

On the topic of staff, the Yardbird Hong Kong team attend daily briefings to ensure any new rules and regulations from the government are implemented swiftly. Measures are constantly changing, as is the case in Australia.

Restaurants in Hong Kong must also conduct temperature checks of customers before they enter a venue, provide hand sanitiser, have at least 1.5m between tables and cap groups to four people.

Your health and safety is our priority. Our dining room is open for lunch Monday-Friday from 12-2PM and for dinner Monday-Saturday from 6PM till late.

Interestingly, many operators in Hong Kong are taking extra precautions, including Yardbird Hong Kong. Customers must wear face masks at all times unless they are eating or drinking and the restaurant has also installed retrofitted panels between  booths, ensuring protection between tables.

Extra measures add up quick, and while they are additional costs, Jang says they aren’t “significant enough to outweigh their benefits”.

Those who have been to Yardbird Hong Kong have experienced one of the buzziest, busiest restaurants in the city, but dining out at the yakitori venue feels a little different right now.

That said, Jang says the allure remains, and it’s business as usual in the most important ways. “Our style of service hasn’t changed, so besides the fact that it’s not super crowded, the experience is similar, just more mellow.”

Delivery and takeaway was never part of Yardbird Hong Kong’s DNA, but the venue launched takeaway and turned to the powers above (delivery platforms) a few months ago to keep the orders coming in.

While it’s a great option for customers to support restaurants from afar, it’s most likely temporary. “We already pivoted to offer delivery and takeout, which has really saved us, but it’s not a long-term plan,” says Jang.

As for some advice for her peers some 5,600km away?

“We have learned that it takes time to prepare and be ready for a new style of service and operations and it can’t always be rushed,” says Jang.

“We always consider the safety and health of our team first and foremost and the minute you open your doors to the public, everyone is at risk if you’re not ready for it.”