Firedoor’s Lennox Hastie is one of two Australian-based chefs to be featured on Netflix’s docuseries Chef’s Table — aka the pinnacle of culinary programming. So just how did the fire connoisseur come to be the subject of an episode in the new BBQ series? He cooked for the production team at his restaurant after a premiere.

Hastie talks to Hospitality about receiving an Instagram DM he couldn’t fathom was real, putting Australian producers on the map and why the further away you are, the louder you have to shout.

Chef’s Table is known for many things. There are the Emmy nominations, the cinematic techniques, its signature theatrical soundtrack and an overall aesthetic that can only be described as slick. The show has rung up six seasons profiling some of the world’s greatest culinary minds, but the latest iteration is different from the rest — it’s themed. Chef’s Table: BBQ is also shorter, comprising just four episodes.

Hastie has been a long-time fan of the production team behind the concept, and was more than thrilled to have the opportunity to cook for them at Firedoor — he just didn’t know a meal would result in a 47-minute episode streamed across the globe months later.

“I showed them what we do and it was a real pleasure to meet them; I didn’t think anything of it,” says Hastie. “At the end of November, I got a message from Brian McGinn on Instagram asking if I’d like to go on the next series of Chef’s Table. I was blown away. You know when you think something can’t be real that it must be some kind of practical joke? I said, ‘Yes, whatever it takes!”

The wheels spun into motion, with plans to shoot the series in Australia over a two-week period in November — the peak time for local restaurants. And while the timing was a little tricky, the opportunity to showcase Australian producers and put the industry back in front of an international audience again couldn’t be passed up.

Before the production crew arrived in Australia, Hastie spoke to the team about his story, from discovering an interest in the culinary industry to cooking alongside Victor Arguinzoniz at Asador Etxebarri in Basque Country; which went on to become a focal point of the episode.

The Chef’s Table team hit the ground running when they touched down not long after that Instagram message. While the goal was to give viewers a taste of Australia, filming during the tail end of 2019 had its challenges with the bushfires. “Some of the produce comes from far away and we had a whole list of places we wanted to go to but we couldn’t get to; one of them being in Victoria — the hunting of kangaroos is a really powerful Australian story,” says Hastie. 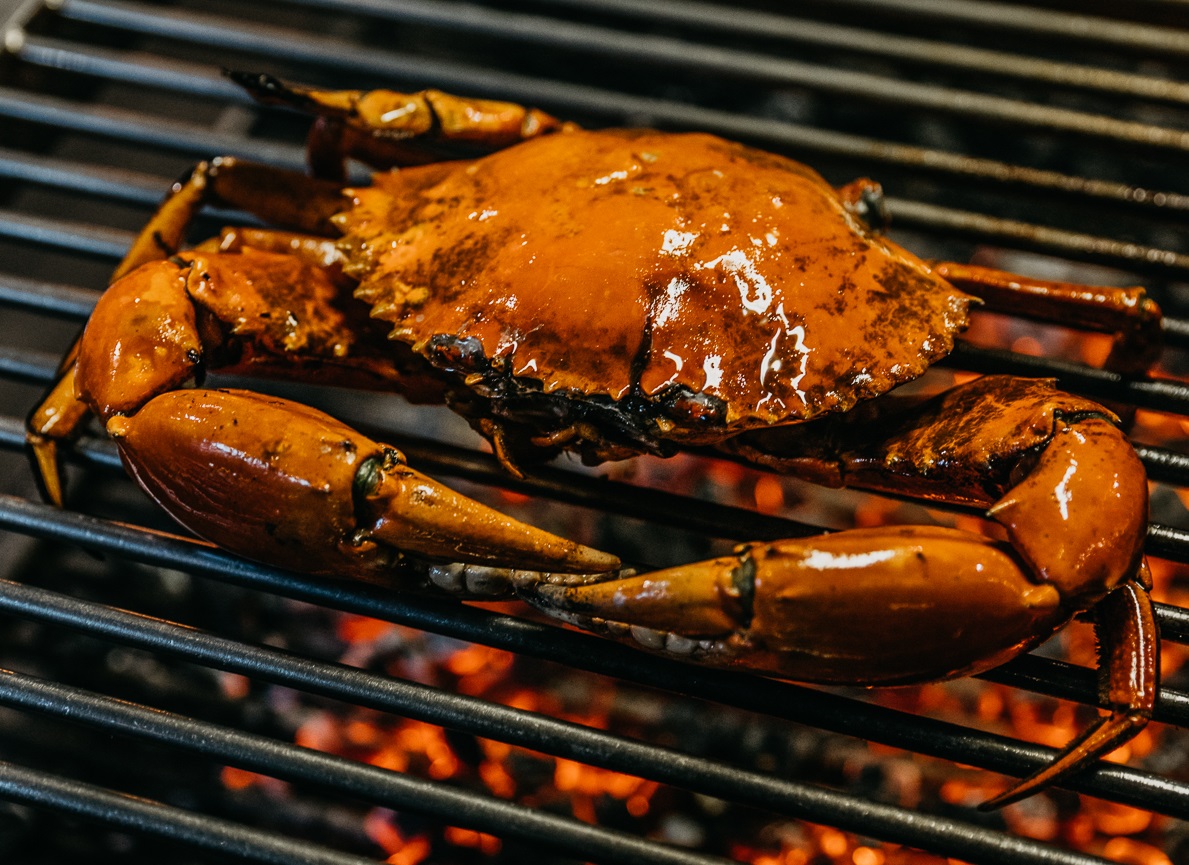 Nevertheless, the goal was to show as much of the country as possible and take viewers beyond the Surry Hills restaurant. Hastie says selecting which producers to film with was comparable to “choosing your favourite children”, but it had to be done.

The episode includes scenes at Stix north of Sydney and a cattle farm, where the top 2–3 per cent of the herd is selected for the restaurant’s signature ʻfat agedʼ steak. Montages follow of crabbing, filleting fish and scooping prawns from the river. “All the producers are unique and deserve to be showcased,” says the chef. “I could not do what I do without the ingredients — there’s the fire, the ingredient and me. Without the ingredients, forget about it.”

Hastie had no idea his episode would slot into a themed series when he was first approached about being a part of the show, which also features Tootsie Tomanetz from Snow’s BBQ in Texas, Rodney Scott from Scott’s Barbecue in the US and Mayan chef Rosalia Chay Chuc from Mexico.

The thing about barbecue is that it evokes different connotations in each part of the world. In the US, it’s anchored by slow-cooked meats that tease apart, but in Australia, there’s a little more bite to the ingredients that hit the grill. “It’s tongue in cheek for the guys — they’re showcasing how diverse barbecue is,” says Hastie.

“I can imagine people watching Tootsie and then episode two cuts to a young chef in Sydney who’s not doing what they’d recognise as barbecue. I want to change people’s preconceptions of what grilling and barbecue can be. For me, it doesn’t have to be limited, it’s boundless and a beautiful freedom of expression that relates to our culture and the ingredients. I’m happy to be able to turn the word barbecue on its head and show the rest of the world what we can do with barbecue in Australia.” 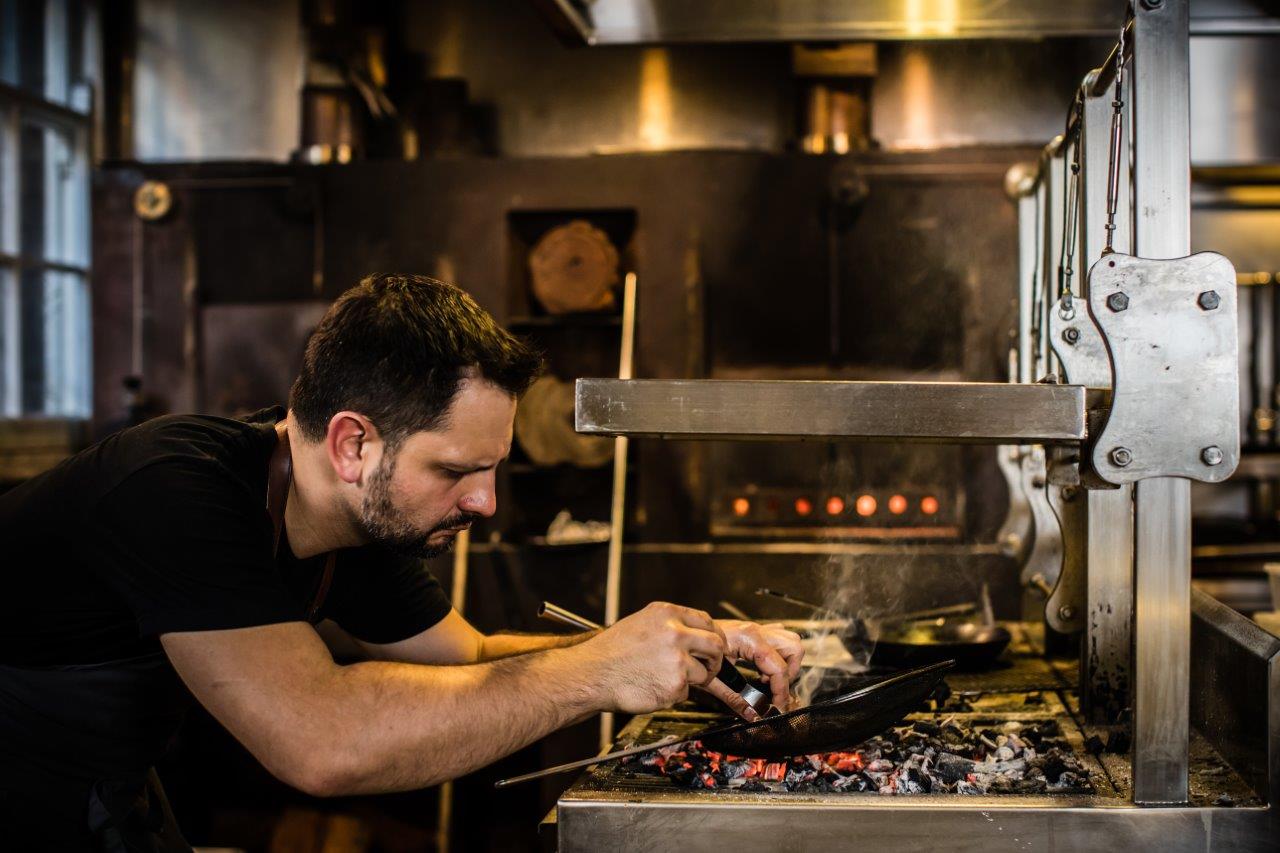 The storyline developed over two weeks of back-to-back filming, but the crux of the episode very much centres on the mentor– mentee relationship between Arguinzoniz and Hastie. For those yet to watch the episode (snap to it!), Hastie arrived in Spain at a pintxos restaurant after realising fine dining just wasn’t cutting it for him. “I got to that level of working in a three star and you think you’re going to find what you dreamed of, and it wasn’t that. I was left feeling pretty hopeless. Where do I go now?” he says in the episode.

After some friends told Hastie about a chef who grills “everything”, Hastie was curious to find out what the restaurant between the mountains was all about. Years of game-changing learning from a man who could be likened to a conductor of flames ensued. In spite of language barriers (Hastie could not speak Spanish, nor Arguinzoniz English), the pair worked side-by-side, and it wasn’t long before Asador Etxebarri morphed from an in-the-know restaurant to one that climbed lists and received a Michelin star.

“For me, it was very rewarding,” Hastie says in the episode. “All the hard work was being recognised. But Victor cried in disgust. I’ve never seen a man so upset about getting a Michelin star. Because he was quite happy being what he was.”

Five years on, Hastie chose to leave Asador Etxebarri to follow his dream of opening his own restaurant. The relationship between Arguinzoniz and Hastie came to an end once he left Spain, leaving Hastie without closure, which would come years later when The World’s 50 Best Restaurants was hosted in Melbourne.

It’s an incredibly personal story for Hastie, and one he doesn’t speak about often. But having spent so much time with the production team, it was a story he chose to share. “I valued their production levels so much and the level of detail they put into the show,” he says. “I was quite happy … you seldom see that, to open up and give them everything … particularly about leaving Spain, which I still get emotional about.”

The protégée dynamic is one that hasn’t been explored beyond a surface level on Chef’s Table before. “It was interesting — it’s something they honed in on … l’m a chef, but I wasn’t born into a tradition of cooking with fire,” says Hastie. “There were four to five interviews and each one was five hours. The sheer amount of material you go over … it’s amazing what they choose and weave together.” 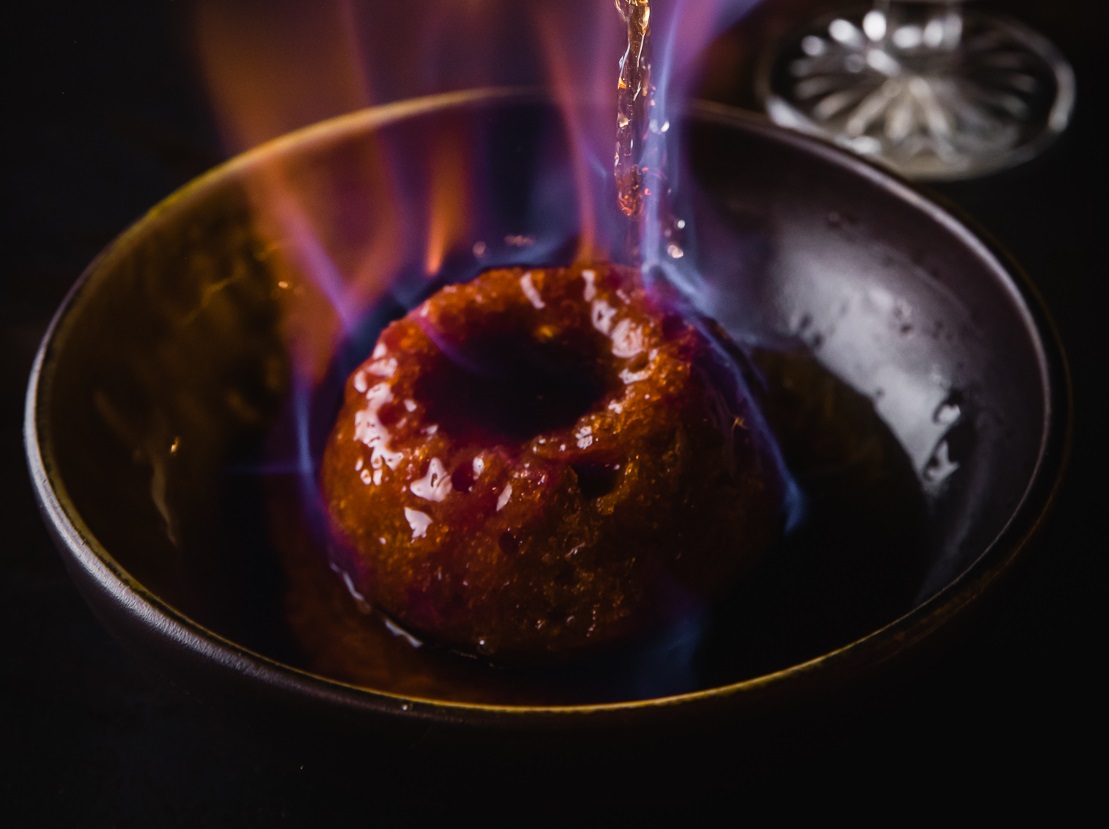 Hastie’s phone has been running hot with supportive messages from peers, strangers and even people he went to school with as a child. The gravity of appearing on a show like Chef’s Table certainly hasn’t been lost on him, and neither has the honour of being the second Australian-based chef to appear on the series.

“It’s huge,” he says. “There are so many amazing chefs I love and respect in Australia, Ben [Shewry] being one of them. Everyone has their story, so it’s such an honour to have the opportunity to tell your story and [show] ‘this is how I got here, it took this amount of time’. Especially for young chefs; things do take time and I’m still learning. I’ve been cooking with fire for 15-odd years and I still feel like I only know a small amount.”

Part of the beauty of Chef’s Table is its ability to take viewers on a journey into a restaurant. And while overseas trips are off the cards for the time being, Sydneysiders and permitted domestic travellers are able to experience Firedoor in the flesh. Hastie says the knock-on effect has been incredible, with the restaurant now booked out until March 2021. “People were ringing up saying there was something wrong with the website — but we’re just fully booked. Some people from the other side of the world have booked for next year.”

In the current climate, a fully booked restaurant is as good as it gets for operators. But Hastie isn’t letting it get to his head. “People suddenly flock to these venues,” he says. “The effects of social media and lists … it’s interesting to see how that can change a restaurant. Sometimes for the better, but you have to be cautious because you don’t want to lose what made that restaurant great in the first place.”

Hastie’s response to preserving Firedoor’s nucleus is simple: “I always cook with conviction,” he says. “People who have come in [after watching Chef’s Table] are surprised to see I’m actually in my restaurant — I’m still pushing myself six hours a night on the grill cooking every single protein everyone eats. That is the reality of what we do at Firedoor and I don’t compromise.”

Over its five-year lifespan, Firedoor has never been fully booked six-plus months in advance. The flock of new (and old) customers has provided Hastie and his team with a small amount of certainty in the midst of a pandemic, from continuing to support producers to job security for staff. But restrictions have resulted in the number of seats dropping from over 60 at any one time to just 37. 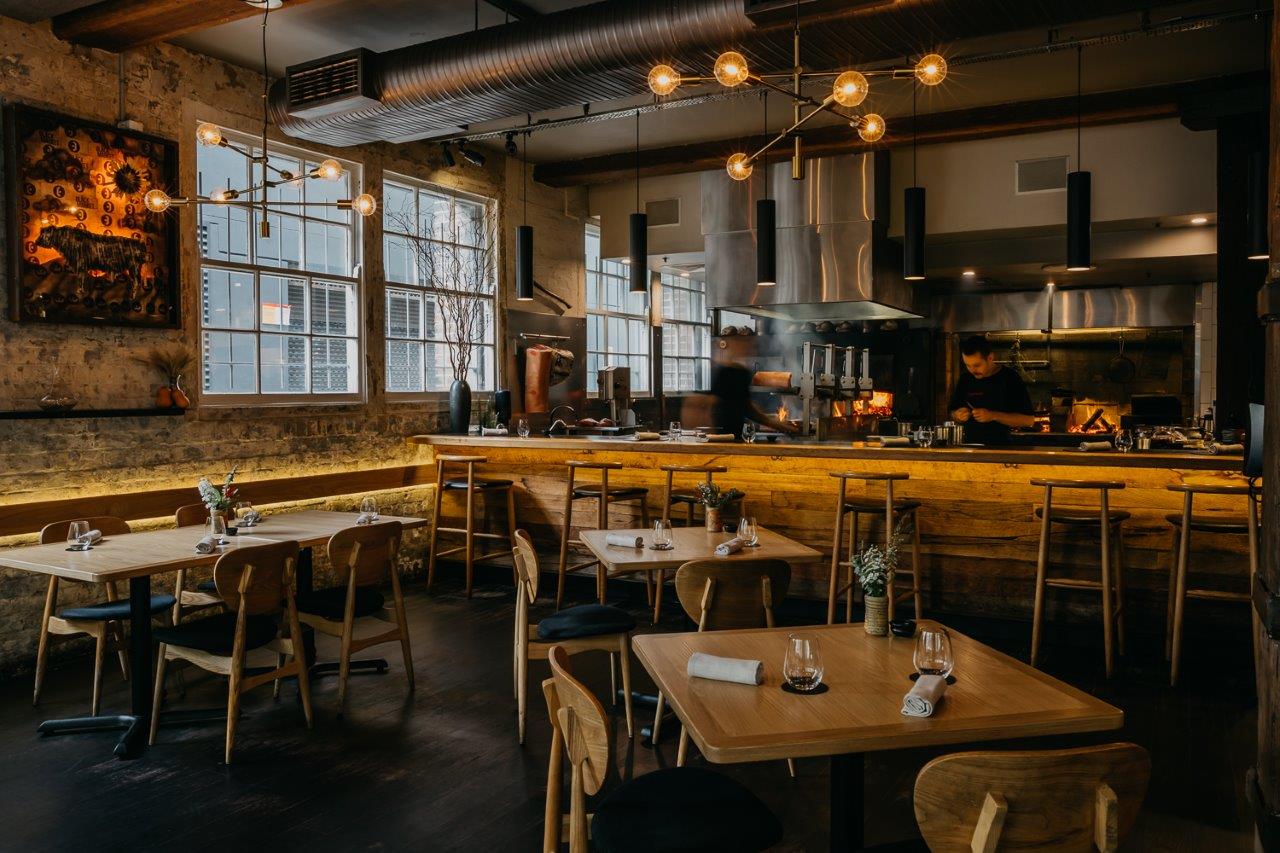 “I was very cautious about how to progress with the pandemic,” says Hastie. “The business model is skewed. I’m not compromising on my staff, what we do, the ingredients we use and the producers we support, so [it’s about] finding a way to move forward together. I’ve got to be able to pay the rent and pay the staff. Chef’s Table will fill those seats and enable us to do that. I never got into restaurants to make money; it’s purely passion and the ability to leave things in a better state than you found them.”

Firedoor as we — and now the world — know it has undergone somewhat of an evolution since it opened its doors in 2015. Adaptation is the belly of the beast at the restaurant, which will continue to rumble on with Hastie behind the flames.

“It’s the ability to adapt to your environment … hospitality is feeling the pulse of what people want at any given time,” Hastie says. “It’s buying a really good ingredient and showcasing it — there’s value in that. When I was younger, I thought the thing I loved more than anything was cooking — which I do love — but only because it puts me in contact with ingredients. The reason I cook with fire is that it instinctively and naturally brings me closer to them.”