Street Food is a nine-part series from the creators of Chef’s Table David Gelb and Brian McGinn. The series is based in Asia, with each episode showcasing street vendors in cities including Osaka, Delhi, Singapore and Seoul. The debut season is a mixed bag of the personal journeys of the people behind the street carts and the dishes they create.

Annabelle Cloros (AC): As soon as the show starts, it’s obvious Street Food is from the creators of Chef’s Table. But for a series called Street Food, I thought there would be more of a focus on the dishes over the personal stories of the vendors. The stories are interesting and moving, but I was expecting more on the conceptualisation of the dishes and if/how they’ve changed over time.

Madeline Woolway (MW): I agree, but I think they executed it well. It’s good to see the same scope and level of production associated with Chef’s Table applied to street food vendors. I was expecting a little more detail about the food, too, though. There were more explanations of individual dishes in some episodes but in others it was lacking. They really glossed over the dishes in the Osaka episode…

AC: At the beginning of the Osaka episode they mentioned udon and kushikatsu, but didn’t cover them beyond a few visuals at the end.

MW: It was a bit frustrating.

AC: I mean, the dish I learned the most about in the Osaka episode was Toyo’s (who is the main subject) blow-torched tuna. But I still don’t understand much about it besides the fact he uses parts of the tuna that aren’t sashimi-grade.

MW: Why did he decide to do that? How did he figure the dish out? That kind of thing would be interesting to know. It felt like the series as a whole really wanted to show how much these vendors have contributed to food culture and how they are as technically skilled as ‘trained’ chefs, so it would be great to hear them share some of that knowledge. 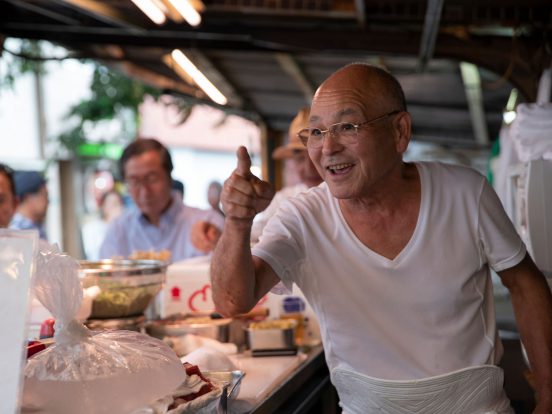 AC: They’ve definitely shed a light on a group of people who have overcome various forms of adversity by turning to food. For many subjects in Street Food, selling food was a universally ‘accessible’ avenue to try to support themselves and their families. For others, it was about ensuring the future of their family businesses. I want to know if the main objective of the creators was to focus on the stories of the vendors. In the Osaka episode, we learned Toyo had a tough upbringing and we found out a lot of personal information about the other subjects including the intimacies of working with family and dealing with debt.

MW: I think that was their aim; they weren’t trying to go into the technical details of the food. The creators did an interview with Eater and one of them said everything they do is based on characters. Which I guess in a way makes sense, because, even though I wanted to learn more about the food, I can get that information elsewhere. I can go on the internet and read about takoyaki or okonomiyaki, but I probably wouldn’t have been able to find much information about Toyo. What we did learn about is the cultural and historical movements behind different ways of producing and consuming food. I really enjoyed the exposition from the experts. Their insights were generally interesting and provided context for some of the individual vendors’ journeys.

AC: To be fair, people watch shows for different reasons. For some, the journey might resonate with them more than the food. But for me, I’m watching it for the food. Some of the episodes were balanced in terms of the food/personal focus like the Bangkok episode with Jay Fai and the Seoul episode at Gwangjang market with Yoonsun Cho. But having been to some of these places and knowing the food landscape, I felt there were some missed opportunities.

MW: Honestly, I ended up really enjoying it and the more I think about it, the more I appreciate what it has to offer to the genre of food shows. In terms of the storytelling — the structure and the emotional impact — it was great. I liked seeing how the vendors were able to work through what could have been crippling experiences. And then a lot of the struggles they talked about are common throughout the industry, everywhere, things like wait times and getting quality produce.

Even if you have constraints, you can still create amazing food. It doesn’t matter if you don’t work in a Michelin-star restaurant or you haven’t been formally trained, you can be a good cook or chef and make people happy with your food. All the vendors are doing their best to make the most of tough situations and it seems like that pressure has forced them to innovate. Their businesses are the opposite of high-profile restaurants that can afford development labs or to shut down for months at a time to create new menus, but it results in the same level of creativity.

AC: Something else I found interesting was the age of the people running these outlets. Mbah Lindu (Yogyakarta) is over 100 years old and still making gudeg (braised jackfruit) on the street. Florencio Escabas (Cebu, Philippines) and Jay Fai (Bangkok) are both in their 70s and Master Tang (Singapore) is 85. These people have worked their entire lives and dedicated themselves to mastering a cuisine or a particular dish. It’s incredible. I’m sure we’ll see season two confirmed soon.

MW: If people like Chef’s Table, they’ll be into Street Food, and I think the hospo crowd can get a lot from watching it.

Keep up with the authors and Hospitality magazine on Instagram 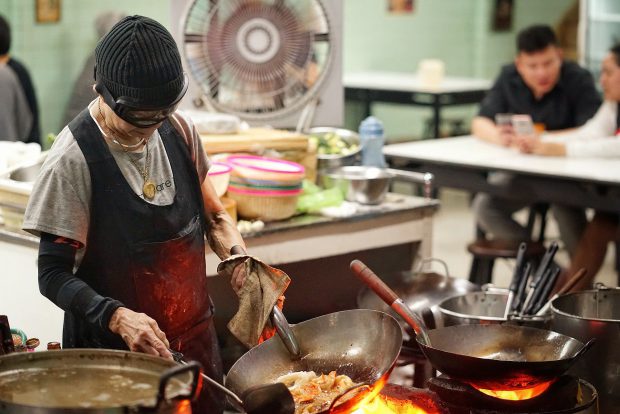