The 2018 list of Asia’s 50 Best Restaurants was revealed at a ceremony in Macao at the Wynn Palace.

The top 50 list has acknowledged eight new restaurants, which have appeared for the first time.

“Asia’s 50 Best Restaurants continues to recognise new talents, identify industry trends and celebrate excellence. We are thrilled to honour the 50 restaurants on the 2018 list, as well as the individual award winners, who inspire us with their singular visions and remarkable achievements.”

Asia’s Best Pastry Chef Award was awarded to Nicolas Lambert, who is currently working at Caprice in Hong Kong.

Ultraviolet by Paul Pairet in Shanghai received The Art of Hospitality Award. The restaurant offers immersive, multi-sensory dining experience that combines gastronomic mastery and theatrical wizardry. Guests are served a tasting menu where each course is accompanied by bespoke lighting, visual effects and other sense-stimulating cues.

Toyo Eatery in Manila earned the One To Watch Award and André Chiang received the Lifetime Achievement Award. 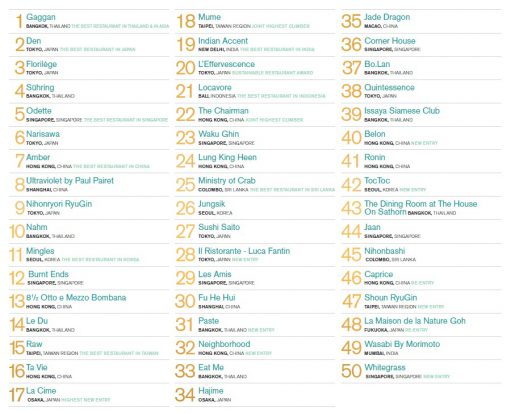