Fermentation: Into the wild

The act of fermenting is as ancient as civilisation itself. The invention is tied to the development of agricultural practices in the Neolithic age and its use has been documented around the globe since. However, it wasn’t until the 19th century that scientists began to understand the mechanisms behind the process. Perhaps the most famous figure is Louis Pasteur, the French biologist responsible for proving different types of fermentation could be elicited from different microorganisms.

Pasteur’s work is what made beer a commercial product, one that could be reproduced consistently, according Topher Boehm, co-owner and head brewer of Wildflower in Sydney’s Inner West.

The progress made by Pasteur and his peers led to the development of commercial yeasts that, when used in highly controlled environments, allow brewers and winemakers to manipulate the characteristics of the end product.

“Commercial yeasts are a later addition,” says Will Berliner, the winemaker behind Margaret River label Cloudburst, which is stocked in restaurants from Eleven Madison Park to Quay. “The layman probably doesn’t realise how manipulated wine is. It’s not just yeast: it’s yeast to bring out the flavour of pineapple; it’s yeast to make a fast ferment; it’s yeast to convert more fructose to glucose and so forth. Specific things can be added for very specific reasons.”

With all these possibilities on the table, why are producers such as Wildflower and Cloudburst seemingly moving in the opposite direction?

“When you have something that’s so predictable, sometimes the eloquence is bred out of it,” says Berliner. “As winemaking proceeds and people experiment with variations of wild fermentation, it’s allowing something more spontaneous to arrive.”

In their search for beauty, modern drink artisans aren’t rebelling against science — they’re recoiling from uniformity, which means they’re taking a fluid approach. “If you ask 10 different producers [for their definition of wild fermentation], you’ll get 10 different answers,” says Boehm. “For me, it has to do with fermentation via indigenous yeasts; yeasts that aren’t cultivated in a lab.”

There are multiple methods for initiating a wild ferment. Boehm’s approach started with some time spent out in nature, collecting sources of sugar which are covered in microscopic yeast. “Over the course of about a year, I took cuttings of flowers, generally around the south coast of New South Wales, and would put them into wort,” says Boehm.

If Boehm liked the flavour profiles after a few months of fermentation, he’d continue fermenting with the culture to keep it alive. “It’s exactly like sourdough,” he explains. “I’ve never been a professional baker, but I make a lot of sourdough at home and I transfer a lot of those things over into the beer.”

When Boehm started Wildflower in 2017, he threw the wild yeast he’d been working with into the wort alongside a single strain of commercial saison yeast and fermented the first batch of the brewery’s beer. “Since then, we collect it off the bottom of the fermentation for the subsequent one exactly as you do with a leaven,” says Boehm. 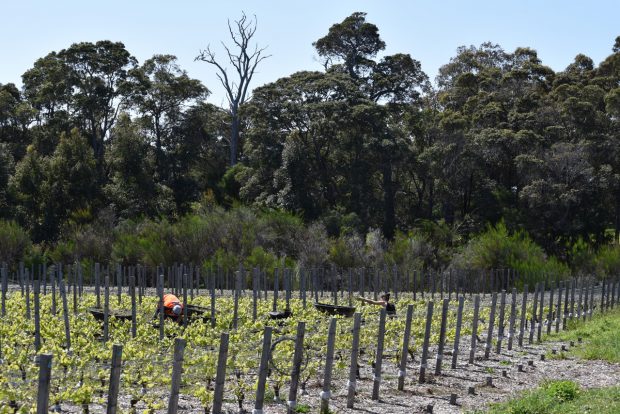 Berliner’s approach to wine-making is as hands off as possible. At Cloudburst, the grapes are left to ferment in the yeasts that occur ‘naturally’ in the vineyard and on the skins of the fruit. “I try to keep it as pure as I can,” says Berliner. “I monitor as it goes, using both my senses and [formal] tests. You know the fermentation is proceeding because the odors change and there’s bubbling. But I also check what the sugar content is. I’m watching the pH level and the amount of acidity.”

The approach is risky. Berliner is relying on the ‘good’ yeasts — varieties like Saccharomyces cerevisiae — to prevail. “It wins in a way that’s really pleasing,” says Berliner. “Whereas some of the ones that win aren’t right; they taste like nail polish. That’s why people have used industrially produced yeast to be sure.”

Berliner thinks the potential rewards are worth the risk. As part of a broader minimal interventionist approach, wild fermentation is why Cloudburst wines taste distinctly like Cloudburst and why each vintage is distinguishable.

“I can’t speak for everyone, but I would say most winemakers want to [produce] the best wines they can and want to make the most expressive wines possible,” says Berliner. “The difference I see is not only that it’s not uniform, but it allows for something subtle to emerge. I think you can actually taste when something has wildness in it.”

“You could say wild fermented products are difficult to replicate or make consistent, which is what makes them more unique,” she says. “To me, wine, beer, cheese, tea — anything that undergoes a fermentation process — should be specific to the place in which it comes from.”

While the change in processes and methods is important, the way wild yeasts alter the final result, even when they’re used in conjunction with lab-bought strains, is the most significant difference to Boehm. “The flavour at the end is dramatically different,” he says. “The way biting into a loaf of sourdough is different to biting into Wonder White. Our beer develops a natural acidity because of those wild yeasts, which wouldn’t happen in a monoculture beer. Then there’s all these complex fermentation characteristics I can’t really describe … those are things yeast can’t give or replicate.”

The variations appeal to drinkers, too. In her role as a sommelier, Evans is tasked with pleasing a multitude of diverse palates every day. “Diners are becoming more interested and accepting of unique flavours,” says Evans. “I am legitimately filled with joy when a guest is ‘happy to try something different and weird’. Weird is good, individual, thought-provoking.”

Given how industrialised food production has become, it’s perhaps unsurprising consumers are now looking for a reprieve just as producers are. “At a certain level, we want to get beyond just white bread,” says Berliner. “The move towards wildness might have some of that [behind it]. People are sophisticated in the way they’re demanding something of depth and interest.”

So, the question is, will more winemakers and brewers follow Boehm and Berliner into the wild?