Education out of the kitchen

‘Farm to fork’ has become a convenient catchcry, but three words can easily replace the people and processes behind them. While it’s increasingly common for producers to hand their bounty directly to chefs, in many cases, it simply isn’t possible.

When it comes to local produce, there’s more than meets the eye — and for those who want to know exactly what’s happening in between paddock and plate, heading to the source is the only way to see production practices for themselves. Those who can afford time out of the kitchen and on the land benefit in more ways than one. Visiting producers onsite leads to a better understanding of production methods and the people behind them, as Hospitality magazine recently discovered on three tours.

When 19 pastry chefs from Australia gathered around a young vanilla plant on the island of Vava‘u in the Kingdom of Tonga, each person was able to describe — with nuance — the flavour, aroma and feel of premium vanilla. They knew what quality markers to look for and how much they would need to pay for it. Moreover, they knew this specific vanilla (V.planifolia) and how it differs from vanilla grown in Madagascar or Tahiti. They knew how they would use it. Yet, despite intimate knowledge of the end product, most had plenty to learn — it takes a lot to get vanilla from seed to sweet treat.

Over the next four days, the group was let in on the intricate processes behind Heilala Vanilla’s products: vanilla so good it’s used by the world’s best restaurants including Eleven Madison Park. The chefs heard Albert Guttenbeil, who operates farms in partnership with Heilala, explain how workers prepare the land for planting. Better yet, they were able to watch as he demonstrated how to loop mature vanilla vines. At a third farm, Guttenbeil explained hand pollination and the labour-intensive picking methods.

The beans then travelled to the original Heilala farm to be processed. Here, the steps are equally as intense, with curing and drying taking roughly six weeks. Sela Latu is in charge of the precise process, talking the chefs through each step alongside Heilala co-founder and CEO Jennifer Ross Boggiss. Chefs handled and inspected bundles of vanilla from the previous season which were held behind. 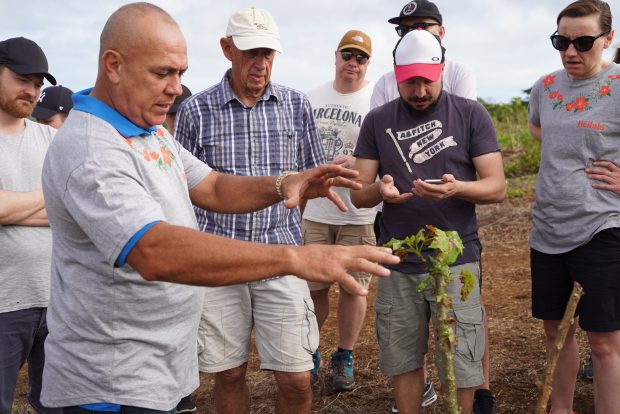 For Koko Black product innovation manager, Remco Brigou, visiting the vanilla farm was an enlightening experience. The Belgian-born chocolatier came with prior knowledge, but was fascinated to discover a new way of looking at a product he works with every day. “I knew about the process they follow in Tahiti, so my impression was that all vanilla was grown like that,” he says. “It was very educational for me to learn the other way.”

It was an assumption also shared by Shortstop Coffee & Donut’s Sydney head chef Natalie Waugh. “I didn’t know the curing and drying process, the amount of time it takes to grow, the fact it’s on vines and [the level of] tending it needs,” she says. “I assumed you picked a black bean off the tree.” So why not just read about it on the internet or in a book? The power of experiential learning can’t be overlooked.

Chefs cook with their senses and similarly learn through them. “I’m a hands-on person,” says Mikayla Brightling, head pastry chef at Shangri-La Hotel in Sydney. “If I read it, at the time I’d think, ‘Oh that’s interesting’, but now I’ve actually seen it, [and the producers] have explained it … it’s more memorable.”

The experience is why Brightling and her cohort were able to recount precise details days later while waiting to board a flight home at 5:00am. The chance to learn on location exists closer to home, too. In recent years, there have been more opportunities to visit producers, according to Claire Van Vuuren, chef and owner of Bloodwood in Newtown, Sydney. “You get so much out of it, so now I try to make time for it,” she says. “You get to see firsthand how it works and get a better understanding of where the products are coming from; it changes the way you think about produce.” 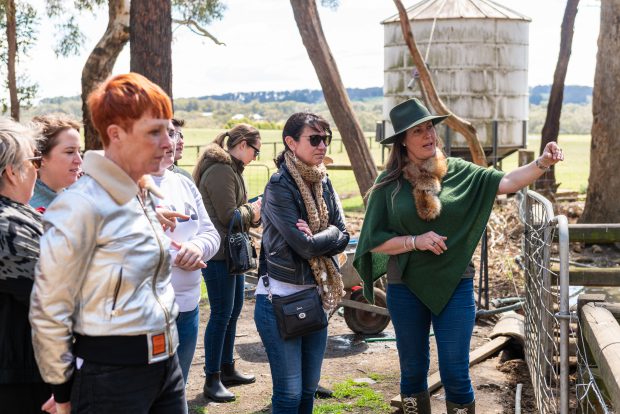 Take Van Vuuren’s learnings from a trip to the Southern Highlands with Women in Hospitality and PorkStar, for example. The Pigs and Apples tour gave the chef a greater understanding of the practices used by Redleaf Farm owner and pork producer Katrina Sparke compared to her own research. “I’ve read up on Redleaf a lot and I’ve eaten their pork,” says Van Vuuren. “I know they’re sustainable and organic, but [it’s interesting] to go there and actually see how wild it is. You can see how the muscles [of those pigs] really develop, so their fat levels will be different to pigs that just stand all day and eat.”

Better insight into the pig farming industry was behind Tara Mulligan’s decision to join the tour, too. The commis chef at Nick & Nora’s in Parramatta wanted to know more about the lifecycle. “Being a chef whose venue uses a lot of smallgoods as well as pork belly, it was informative to understand … what [the pigs] are fed and why and how it can change the final
product served.”

In just a couple of hours, Sparke was able to explain the behaviours of the pigs while the tour group watched the animals interact in (and with) their natural environment. The pigs at Redleaf are as wild as reared livestock can get, and it’s a system their customers can only truly understand once they’ve seen it for themselves. The same can be said for wild harvested game. Straight To The Source’s Wild for Game tour to a venison farm southwest of Sydney was dual-purpose: not only did the chefs need to learn about the methods of production — they had to familiarise
themselves with the end product.

The tour was designed to explore the differences between farmed and wild harvest animals as well as a range of cooking methods. “It was about education, but also inspiration and demystification,” says Tawnya Bahr, co-founder of Straight To The Source. After a tour of the venison farm and roundhouse facilities, chefs watched on as butcher Shannon Walker broke down
a deer carcass with game meat harvester Robert Gallina who explained the anatomy of the beasts and core differences between wild and farmed venison. Questions flowed: “What cuts will win the dining public over?” “It depends on the cut,” explained Gallina, before detailing a range of applications for restaurants. “If you slow cook, will it become gelatinous?” “It’s great for ragu and pies,” suggested Gallina.

Kangaroo meat is touted for its leanness, but the minimal fat content is clear when one is flayed on a table in front of you. While ‘fat is flavour’ is a common refrain, Gallina took the opportunity to clarify that, despite fat percentages close to zero, kangaroo protein holds its own when it comes to flavour.

As Gallina began sectioning the tail into individual joints, more questions arose: “Why are you only breaking down the hind quarter?” “That’s where you get 90 per cent of the meat,” he replied. “Can you eat the offal?” “Yes, it’s beautiful.” “Is there a particular species that produces the best meat?” Lots of people say the red tastes better than an eastern grey, but Gallina doesn’t think there’s much difference. As Walker and Gallina broke down both carcasses, they told the room why different cuts suited specific applications. Not long after, the chefs had a chance to try their
suggestions. A kangaroo carpaccio showed chefs — who hailed from catering and hotel kitchens to cafés — the potential of the national emblem beyond burgers. 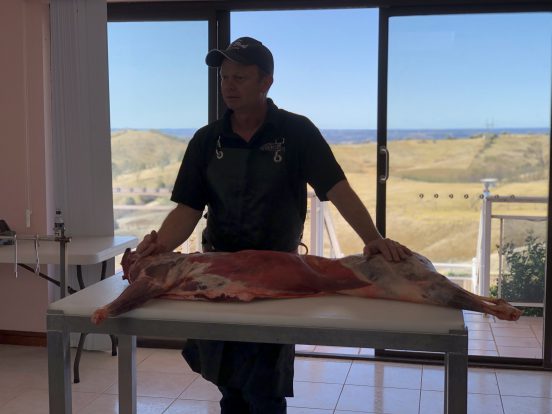 As much as producer tours are designed to teach hospitality professionals about production methods, they’re about highlighting the people behind them. Heilala’s team and their Australian distributor F Mayer Imports partner with chefs who appreciate the flavour of Heilala’s vanilla, but it’s equally important they’re passionate about ethics and traceability. While technology now provides confidence in origin, the tour aimed to showcase the positive effect vanilla production has had on the communities of Vavaʻu. It was a chance for them to “meet our farmers, see the intricate curing and drying process and connect with what’s growing in the South Pacific,” says Ruby Grant, general manager of sales and marketing at Heilala Vanilla.

The story of how Heilala came to be can be read, in part, online. But standing on a vanilla farm, while founder John the island of Vavaʻu and the devastation wrought by category four Cyclone Waka in 2001, left an impression. For chefs to hear the product they purchase by the litre and kilo started as a 45-kilogram harvest a little over 15 years ago was astounding. Brigou has a new perspective that he’ll keep in mind back in the kitchen. When he uses vanilla, the chef says he will now think about the “whole process behind it, the whole community behind it.” He’ll think about all the people it’s supporting back in Tonga. “Everyone knows it’s an expensive product,” he says. “When you actually know why, it makes you appreciate every single bean even more.”

There are parallels between the production of vanilla and the work of a pastry chef. “We know our work is labour-intensive,” says Melanie Day, head pastry chef at Pullman Cairns International. “We can appreciate that their work is, too. It was really good to put a face to the brand.” For Day and her fellow chefs, meeting people like Albert Guttenbeil and Sela Latu was as beneficial as knowing the technical aspects of vanilla production. Beyond the logistics of getting produce from farm to restaurants, producers are able to explain challenges around biosecurity, drought and the cost of organic farming.

Although the latter are a concern for game farmers, the primary barrier is red tape. Lucy Allon, who co-founded Straight To The Source with Tawnya Bahr, hopes the Wild for Game tour helped the day’s attendees understand the challenges game harvesters face in processing their products and getting them to market. “One of the key messages we were trying to get across is that there’s not really a clear understanding where the market is for game, why people aren’t using it as much and what the barriers are for consumers,” says Allon. “The [hospitality] industry understanding that better is really helpful in trying to develop ways to make it easier to source the protein.”

In the Southern Highlands, where recent rain had encouraged the regeneration of grass and left pools of water and mud under feet, the long-term impact of drought was evident. “Hearing farmers speak is really beneficial,” says Van Vuuren. “When you actually see the effects of drought, you know prices are going to increase indefinitely because the farmers can’t catch up.”

Those prices were put in perspective when it was revealed Sparke and her family bear the sole responsibility for maintaining the farm due to falling production levels on the back of drought conditions. It’s becoming increasingly apparent restaurants influence the way we customers consume food, and in turn, the industry can support more sustainable production methods. However, successfully transitioning to more ethical practices requires more than incidental conversations with producers. The answer is to experience provenance, not just talk about it.

The author was a guest of Heilala Vanilla Straight To The Source and Women in Hospitality.