Our sales went down by 40 per cent after the news of the coronavirus came out and there was also a warning for Legionnaires disease in Haymarket, so it was a double hit.

It might have affected us by 40 per cent, but I’m guessing people who don’t have the brand we have would be impacted even more. A lot of them have chosen to close for a period or even for good.

I’m really grateful and thankful for my chefs and workers who understand what I’m going through. Some of them agreed to take a break and not work for a week or two.

We’re spreading shifts out, so rather than 38 hours, people are doing 20 hours a week instead. I’ve lost a few workers who have taken jobs elsewhere, but I don’t blame them.

Although the media has helped get people to come out and eat at restaurants again, it hasn’t changed the fact Chinatown is still dead. People associate the virus with China and we’re in Chinatown, so they think it’s the worst place to be; the whole area is quiet.

People have been treated and recovered from the virus, but fear is something none of us can control. I want to put my foot down and say racism doesn’t play a part in this at all. It doesn’t matter what race you are — if you’re afraid, you’re afraid. 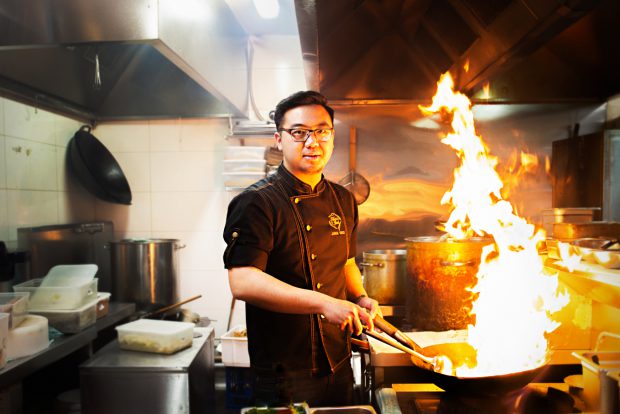 The export industry has definitely been affected and fishermen are choosing not to go out every day. We can’t get marron or lobsters as regularly as we did before, so we have to order in advance.

To get customers in, we’ve been changing up our specials and putting on dishes that are labour intensive and don’t make money, but we’re giving the people what they want.

We’re charging $100/kg for crabs which were $180/kg before. It’s not about making money right now; it’s about helping the fishermen so the product can be moved and people will order more.

I own the restaurant myself, so it’s important for owners to just survive right now. There’s nothing we can do about it and it’s going to take time, but we have to do our best to manage the costs and manage staffing so we don’t lose too much money. We try to keep the losses to a minimum and break even to get through this period.

Sales have picked up by 10 per cent after all the media coverage, but we’re still down 30 per cent.

I just want to encourage people to come out instead of choosing to stay at home. We need more pedestrians and traffic in Chinatown to bring things back to normal again.