Beach Bums Café in Forster, New South Wales, has been roasted online after a photo of their menu went viral.

The café received a number of messages on Facebook over their 20c chicken salt charge. It wasn’t long before an image of the menu was posted to Reddit, attracting more than 168,000 views and 370 comments.

“That’s a bloody outrage,” and “how much money were they losing because of chicken salt abuse?” are just some of the comments on the post.

However, a café spokesman says the charge has been misunderstood and is only for customers who request chicken salt for food purchased at other vendors.

“We do not charge our customers for chicken salt,” a Beach Bums spokesman told news.com.au.

“The charge displayed on our menu board is for customers who bring food into our venue purchased from competitors and ask us to put chicken salt on it for them.”

The spokesperson also specified the cost of chicken salt, confirming the venue pays “around $22” for a 2kg box compared to regular salt, which is $1.82 for the same size.

“For the average serve of chicken salt [at] 20g, the cost price is 22 cents,” says the spokesperson. “Considering the customer hasn’t purchased from us in the first place, I don’t find this an unreasonable charge.”

Due to Beach Bums’ beachfront location, the café is a go-to for non-paying patrons to take cutlery, salt, cups and napkins.

“People buy takeaway food from our competitors and walk/drive to the beach [before realising] they don’t have sauce, cutlery, napkins, chicken salt, etc,” says the spokesperson.

“It was becoming a real issue and the reason the charge was introduced [was because] it was taking time to service these people, who would normally go straight to the front of the queue, slowing down service, especially during the holiday season.”

The café has since removed the 20c charge. 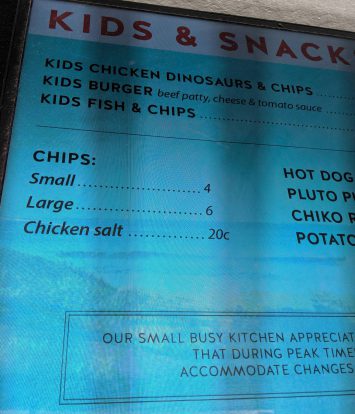