The hospitality industry thrives on pressure, creativity and long hours. But it’s the relationships chefs and foodservice professionals form with each other that make the sector such a great one.

Australia is home to some of the world’s best chefs who have refined their craft and are now looking at how they can foster up-and-coming talent beyond their own kitchens. Peter Gilmore and Danielle Alvarez are two culinary figures who are more than happy to share their knowledge and lend a helping hand to the young guns rising to the top.

The pair talk to Hospitality about their roles as judges and what they take away from their experiences on judging panels.

There are a number of programs hospitality professionals can enter that provide myriad opportunities, whether it’s meeting like-minded peers, gauging performance in a competitive environment or even attending money-can’t-buy culinary experiences. Appetite for Excellence, The Ora King Awards and S.Pellegrino’s Young Chef are just a handful of the programs, and they share a main commonality — access to influential chefs.

You’ll find Peter Gilmore in the kitchens of Quay and Bennelong, but you’ll also catch him on the judging panels of Young Chef, Appetite for Excellence and the delicious. Produce Awards. Gilmore has participated in a range of programs over the years as both a mentor and a judge, and says it’s all about nurturing the future. “I get a lot out of putting time into the next generation of young chefs coming through,” he says. “Any chance you get to put back into the industry — it’s such an important thing to do.”

When Merivale’s Danielle Alvarez received a call from S.Pellegrino asking if she’d like to join the 2019 judging panel, the Fred’s chef didn’t hesitate to say yes. “I couldn’t pass on the opportunity to see what some of the young talent out there is capable of,” she says. “I have also been a judge for the delicious. Produce Awards for the past three years because I am so passionate about using the best Australian produce. It’s an amazing way to be exposed to what is out there and to taste many things side by side, which is a rare opportunity.” 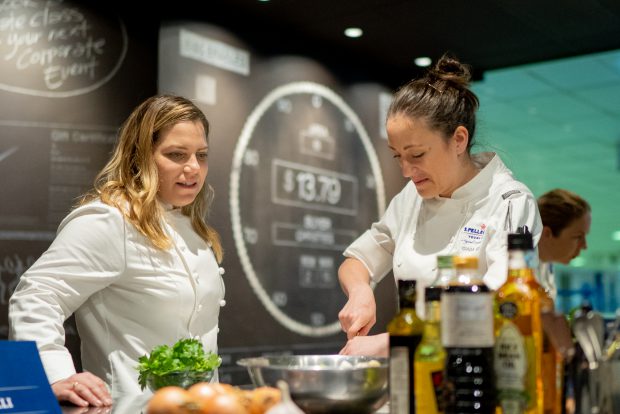 Both Gilmore and Alvarez were both part of the 2019 judging panel for the Pacific arm of the Young Chef program and had the opportunity to watch the 10 semi-finalists make their dishes in Sydney. As was the case for many of the judges, meeting the young chefs was a first for Alvarez, who says all their dishes were a total surprise.

But what was most memorable was the tenacity of the competitors. “I saw so much passion and dedication in those young people, and I was quite impressed at how brave they were in putting themselves forward for something like this. I think those who were most successful made food that was rooted in their cultural heritage using modern techniques they have learned.”

Gilmore says applying and getting through to the next round was a huge accomplishment for the semi-finalists, and is one they shouldn’t brush over. “Any young chef who puts themselves out like that — even if they didn’t rank — gets so much out of the experience. They meet other young chefs and talk about their experiences and it’s all a big growth thing. Sometimes not winning is more powerful because it makes them reexamine what they’ve done and can do better.”

Gilmore is slated to travel to Milan, Italy, alongside Pacific regional finalist Jose Lorenzo Morales for the grand finale in 2021, which will see Morales compete against 11 other chefs from around the globe. Gilmore says he’s looking forward to stepping into the mentor role to support the young chef.

“Being a judge is important as you have to pick a candidate you think can represent the region, but being a mentor is quite different. You’re there to remain calm and supportive. When you’re a young chef doing this for the first time, there’s a lot of anticipation and pressure, so it’s good to have an older head in the equation. You can keep them calm and focused and give some words of encouragement — it’s like being a coach.”

The pair recently spent a day in the kitchen of Quay, which saw Morales create his dish from scratch and present it to Gilmore for review.

Dubbed ‘Analogy’ (roasted lechón pork belly, shrimp bogoong paste, pandan rice cracker, latik caramel and tamarind powder), the dish is influenced by the chef’s Filipino background and showcases flavours from the north. Gilmore says Morales’ dish stuck out, and the decision to award him as the Pacific winner was unanimous. 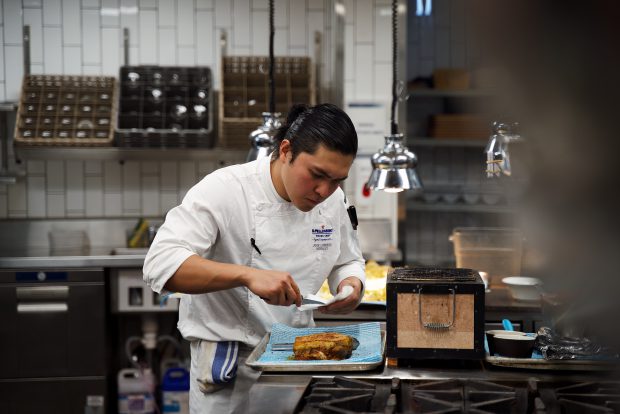 “The judges all agreed his dish was the standout,” says the chef. “It was really unusual and very original; there are obviously a lot of elements from his cultural background and there were flavours I wasn’t familiar with. What really impressed me was how those flavours worked together and ate as a whole dish — that’s a skill that’s really hard to teach.”

While taking the time out to become a judge might require a few extra hours in their own kitchens, Gilmore and Alvarez say it’s worth every second.“I get exposed to things I don’t normally see — it could be a product, a producer or seeing what the young chefs of Australia are capable of,” says Alvarez.

“It’s important to be a visible member of the hospitality community and judging at these competitions helps me do that. It also helps me build relationships with my fellow judges who are always people I admire and can learn from.”

Gilmore says he takes any chance to give back to the industry and encourages his peers to do the same. And while he has etched his place in history as one of the most successful and admired chefs in the country, he says judging has always provided a learning curve and a window to reflect on his own ideas and dishes.

“When you judge someone else’s work, it makes you re-evaluate your own in a way that you might not have looked at for a long time,” he says. “Any time you are able to creatively help someone, you’re creatively helping yourself as well.”