In a country where food is valued above all, what does it take for a culinary venture to make its mark? Hospitality heads to Burgundy, France, to speak to Michelin-star chef Lucile Darosey.

For chef-patissiere Lucile Darosey, hard work and perseverance earned her a Michelin star at the age of 27. Now 32, the chef heads up Loiseau des Ducs with her fiance and chef de cuisine Louis-Philippe Vigilant, but the story of how they ended up there is touching. You see, the location was entrusted to the pair by Dominique Loiseau, the widow of the late French chef Bernard Loiseau.

Darosey says will never forget the day Loiseau asked her to be the pastry chef of the restaurant. “It was an honour,” she says. The chef says Loiseau was confident the pair could share “the spirit of Bernard Loiseau” with guests. 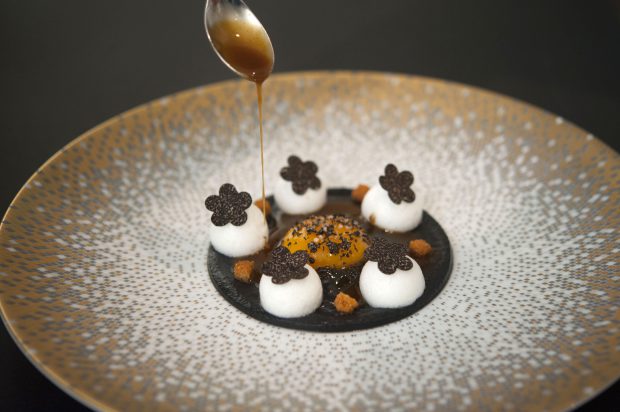 “It was a big challenge for us because we were so young, and the first post of chef is so important,” says Darosey. The move paid off for the pair, and within the first year of operation, Loiseau des Ducs was awarded its first Michelin star. “When we got the star, it was huge,” says Darosey. Despite working at starred restaurants in the past, Darosey says Loiseau des Ducs’ warranted a different feeling. “When you earn the star yourself, it’s personal.”

While many pastry chefs have a signature dessert, Darosey isn’t pigeonholing herself and says she’s content with experimenting. The current menu combines Burgundy wine with chocolate, with dishes ranging from raspberries with confit fennel, pearls from Japan and green anise to Grand Cru chocolate mousse with arugula pesto, herb sorbet and cream puff pastry.

For those hoping to follow in her footsteps, Darosey’s advice is this: “don’t be afraid of the hours”. Darosey herself admits she has lost count of the hours she put in during training. In the end, only the patient and passionate prevail. Having the right frame of mind doesn’t hurt either. “I think when we work with passion, we don’t work so hard at all.”