The life of an airport operator

Airports have long been the domain of fast food operators and overpriced fare, but it seems execs have had a change of direction, and are looking to replicate premium dining experiences found in their respective cities. Airports present an opportunity to leave a lasting impression on domestic and international tourists — not to forget the thousands of employees working on-site.

With 36.7 million people moving through Melbourne Airport in FY17/18 and 44.4 million travelling through Sydney Airport in 2018, operators are guaranteed a constant stream of customers keen for a meal on the go or a celebratory Champagne.

Mike McEnearney from Kitchen by Mike and ST. Ali’s Salvatore Malatesta talk to Hospitality about expanding their customer bases, appealing to the masses and the ebbs and flows of managing airport outlets.

Chef and restaurateur Mike McEnearney didn’t hesitate when the opportunity to open Kitchen by Mike (KBM) at Sydney Airport presented itself. “In 2015, I was approached by Emirates, who had been circling KBM for quite some time,” he says. “They had done their research and looked at what KBM was and thought it would fit perfectly in the airport landscape.”

Launching the brand at the international airport in 2017 was not just a business decision, but a personal one. McEnearney and his family travel frequently, and the chef saw a gap in the market for healthy, whole foods. “I jumped at the opportunity to give travellers a chance to eat what they wanted to eat — it would change my life and other people’s lives,” he says. The chef went on to open a second airport outlet, Kitchen by Mike Express, in early 2018 in the casual dining precinct.

Salvatore Malatesta received a similar phone call last year asking if he was interested in opening ST. Ali in Melbourne Airport. “My initial response was it was going to be difficult to staff, but it was really exciting,” he says. After going through the tender process, ST. Ali launched in the international terminal in April, and it’s been full steam ahead ever since. “We get to serve coffee to everyone who is leaving Melbourne or who comes to Melbourne for a holiday, and that’s pretty great,” says Malatesta. “Who doesn’t want 125,000 people walking past their door every day?”

Staffing venues is tricky at the best of times, and for outlets located in difficult areas, it’s even harder. Sydney Airport is accessible by train, but a ‘gate pass’ fee of $14.30 is tacked on top of the ‘rail component’ fare, which can result in transport costs around the $20 mark.

There’s no airport train line in Melbourne, meaning staff have to rely on buses or airport parking. Whichever way you look at it, commuting is a costly exercise for employees and employers alike.

Key staff members from ST. Ali were relocated to the airport outlet, and Malatesta has tried to make the transition as smooth as possible. “It’s far away if you don’t live around the area and the hours are 5am until midnight, which is a long day,” he says. “Employees have been taken care of from a remunerative perspective to compensate for travel time, parking and all that kind of stuff.”

ST. Ali has a unique business model where a number of roles are kept ‘in the cloud’, enabling the business to remain fluid and adapt to changes. “We have a culinary director, a costing chef, an executive chef and a head chef,” says Malatesta. “Those roles are sitting in the cloud for us to access whenever we need them. We refer to those roles as ‘insurance’, so if anyone goes down or there’s a new opening, we’ve got it covered and it doesn’t affect service because someone can step in. We have the financial capacity for those roles, so why not make everyone’s lives easier?” 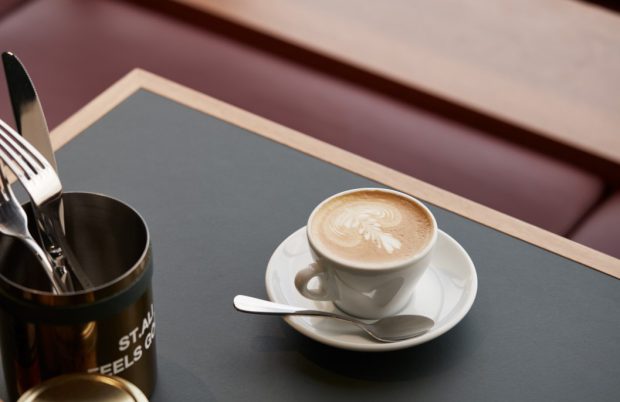 McEnearney says Kitchen by Mike has always made the effort to look after staff, and is understanding of the high travel costs. “A ticket to the airport is very expensive, the minute you pass Green Square, you’re paying private prices,” says the chef. “Parking is also very expensive, so it’s not an easy place for people to travel to for work. But there are some perks we have given staff to make travel easier. We have a great team, so you just have to get over the speed humps and work out how you can look after your staff.”

Security is naturally high in airports, and it can be a learning curve for operators to get the hang of protocol. Malatesta and McEnearney both use the example of running out of milk, which isn’t a big deal for a standalone venue, but can be make or break for an airport operator. “It’s not as easy as texting your supplier and saying, ‘I’m out, can you rock up in the next 10 minutes?’” says Malatesta. “Everything has to go through security. It involves careful planning, which is not normally synonymous with food and beverage operations, so we’ve had to improve that.”

Kitchen by Mike has experienced the same delivery conundrum. “As a restaurant within the airport, your deliveries have to go through the X-ray tunnel, so if you order milk, you might not see it for a day because it gets stuck or sometimes other people are bringing in a lot of stuff,” says McEnearney.

There’s also the matter of staff inductions, extensive paper work and security briefings for all employees. McEnearney remembers the early days working at the airport before he received his aviation security identification card (ASIC). “When you have a visitors pass, you need to be accompanied by an ASIC cardholder and stay within 10 metres of them at all times,” he says. “To get the ASIC card, you need to pass a test and have ID and background checks done. The security is immense, but you get used to it. The airport does a great job at making it easy and we need to make it easy for staff as well.”

Airports are tense environments for workers and commuters, and staff need to be equipped to deal with each and every customer. Malatesta has observed three types of travellers: anxious, happy and efficient, and says they all require different types of service. “The efficient traveller wants coffee quickly so they can go to the lounge, the anxious traveller is a bit confused, so they need nurturing at point of sale and happy travellers order espresso martinis and Champagne and sit in the café until they get on the plane,” he says. “Travelling is a tense experience — you’re going through security and people are checking your passport, so staff are trained to look for those signs and provide the appropriate level of service to customers.”

The team at Kitchen by Mike aim to facilitate the traveller experience across both outlets, but are conscious of the unique environment they’re operating in. “The demographic is enormous, people aren’t coming to KBM, they’re flying out of an airport — it’s very different,” says McEnearney. “Airports have a captive audience, and they’re only coming to you because you’re the best of the batch. What you’re serving might not be aligned with what customers are looking for — some people want white bread with margarine, but we serve house-made sourdough and cultured butter. We always do our best to look after people, but the demographic is much broader and entirely different to what we see in a restaurant out in the open.” 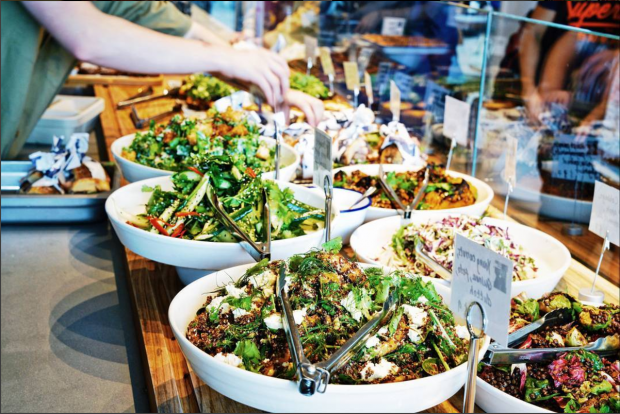 Like Malatesta, McEnearney has observed the different types of customers coming to Kitchen by Mike. “There are people who want to rush through customs, clock on the holiday and have a drink before they go on and others who want to have a drink with their family before they go through customs,” he says. “Then there are the 2000 staff members who eat at the airport, and they’re another part of the demographic we need to look after.”

You can’t please everyone, and designing an airport-friendly menu is a completely different process to creating a menu for a standalone outlet. Chefs must consider the widespread audience (hello dietary requirements) and the limited kitchen facilities. ST. Ali culinary director Daniel Dobra put together an airport menu that consists of the most popular dishes from the Yarra Place café. “We’ve had to repurpose best sellers knowing we don’t have a full kitchen at our disposal, so it’s been challenging,” says Malatesta. There were also a few limitations in the kitchen which came as a surprise to the team. “The knives are tied to the bench with strong wiring, so there are a few things to get used to.”

Kitchen by Mike is a produce-driven concept and the menu changes twice a year in line with an autumn/winter and spring/summer theme. The team test new dishes at the KBM outlet in the CBD due to limited space in the venues and the fact producers aren’t able to easily access the venues. “We drive the connection with producers from the city and we think about what we can execute at the airport efficiently,” says McEnearney. “The airport kitchens are very tight, producers can’t come and see me, and if you’re doing a busy breakfast service with 500–1000 people, you don’t have a great deal of space to start experimenting.”

Airports provide operators with an invaluable opportunity to share their concept with a domestic and international customer base. But as Malatesta puts it, you have to look through a different lens in order to succeed. From training staff to deal with stressed commuters to putting together a menu that appeases the masses, the market isn’t an easy one to crack, but if you can get it right, the world’s your oyster.

This story originally appeared in the July issue of Hospitality magazine. Subscribe here.