Making Wegener’s win all the more impressive is the fact that she shook her first cocktail only eight months ago, when she opened Hades Hula House in the Adelaide suburb of Semaphore.

Wegener impressed the judging panel with her cocktail ‘The Muldejewangk’ (pictured below), which draws inspiration from a mythological creature said to exist on the banks of the Murray River.

“It’s unbelievable,” Wegener told BARS&clubs after being announced as the winner. “Eight months ago I opened the bar and shook my first cocktail, with the idea of just entertaining people and having a good time – and then I’m here.

“The call to be a regional finalist was insane, it blew my mind and I never expected it, and then to be here and in front of these guys is just stupid!” 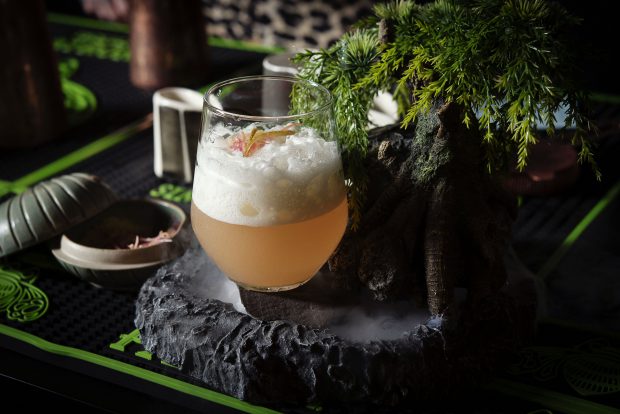 The rookie bartender drew on a “lifetime in hospitality” and her experience as a professional burlesque performer to keep the room (and the three judges) entertained.

“My whole philosophy when I opened my bar was to entertain and have people have fun – whether they ordered a cocktail or a water, it didn’t matter, they’re just there to have a good time,” said Wegener. “So, I brought that attitude to the stage tonight – maybe that ‘roughness’ was what got me over the line.”

The Australian Finals – hosted by the recently appointed Patrón Ambassador Alejandro Archibald – were held at 11 Bridge Street in the Sydney CBD, with 100 trade, VIP and media guests in attendance as six of Australia’s top bartenders battled it out.

Each bartender was challenged to create a Patrón Tequila based cocktail inspired by Australia. Based on this and the criteria of appearance, originality, service and of course, flavour, the three judges awarded Abby Wegener’s cocktail ‘The Muldejewangk’ (recipe below) the overall win.

“It took us a little bit of time to deliberate – we weren’t just upstairs drinking tequila, we were deliberating over all of the drinks,” said Cox upon announcing Wegener as the winner. “We all agreed that we would quite happily sit and enjoy all six of these cocktails in a bar, they were fantastic.

“As a foreigner, and only my second time in Australia as well, I have to say I’ve learnt a hell of a lot about botanicals and ingredients from the local market. We really enjoyed all of the consideration that the finalists gave to the land that they’re from, and they were all very polished and professional presentations.”

Abby Wegener will now represent Australia and compete against eighteen other national Patrón Perfectionists winners in the Global Finals that will take place in Mexico in January 2019.

This article originally appeared on The Shout.