The Hospitality team is lucky enough to call eating work, but how do you sum up a year’s worth of meals and decide which ones make the cut? Sticking to the criteria, that’s how. For us, a memorable meal is one that lingers in your mind months after it happened (obviously) and the food and service is just as good as the other. Here are our top picks for 2019. 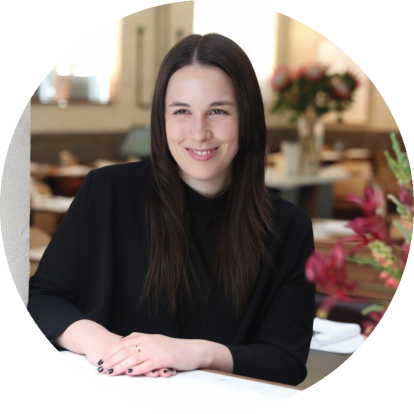 I had the pleasure of seeing what Arthur is all about in the flesh after profiling chef and owner Tristan Rosier in the May issue of Hospitality. For those who don’t know, the pioneering Surry Hills eatery offers a set menu with two dishes served at a time. Rosier’s potato, rainbow chard and garlic puree dish was out of this world, and while I’m sad to say it’s since been retired, there’s a green garlic and potato doughnut that looks just as good.

Potato + rainbow chard + sweet garlic @arthurrestaurant If you haven’t gone to this spot yet, you need to! Tristan and the team are killing it with their set menu. Thank you for having me 🙏

While covering the World’s 50 Best Restaurant Awards in Singapore, I caught wind of a new opening from Rishee Naleendra and Gareth Burnett.The team kindly squeezed me in for a preview and what followed was a progression of snacks followed by nine courses and petit fours; including a teeny Vegemite toast and a wattleseed Madeleine. The Western Australian marron with Sri Lankan yellow curry has gone on to become Cloudstreet’s signature dish, but the venison tartare with fermented plum and cashew is my pick.

New Zealand venison tartare with fermented plum and cashew. @cloudstreet.sg @rishinaleendra & Gareth – what an experience! I’ll post more photos tomorrow, but if you’re in Singapore, you need to get to this restaurant when it opens on 8 July #

Tasmanian-based Meru Miso held a media lunch at Bentley earlier this year, and each dish in the multi-course meal included a miso from Meru’s line. The red miso with pumpkin curd and citrus sorbet dessert created by chef Brent Savage was the showstopper and potentially one of the best desserts I’ve come across thus far. Having dined at the restaurant for both fun and work purposes, the service (and food) was right down the line.

Belon had been on my radar for a while, and I didn’t hesitate to book a seat when a sporadic work trip to Hong Kong presented itself. It’s a great spot for couples, but if you happen to be a solo diner like me, it’s just as good. The charming front of house team are a huge credit to the Black Sheep-run restaurant and made me feel like I wasn’t sans company. Chef Daniel Calvert’s riff on French food sounded something like this on the night I dined: leavened bread with salty butter and a tiny falafel to start followed by Hokkaido scallop punctuated with citrus and a delightful strawberry mille feuille. The whole roasted chicken the table next to me ordered looked bloody good, too – just do it.

I peeped this Balmain restaurant on Instagram and decided to give it a go one Saturday evening. After arriving around 6:30pm, the restaurant was heaving with people less than 20 minutes later – a good sign for a new opening. Chef Martina is running the show here and all the classics are on the menu. Grilled pita with tarama and saganaki with Greek honey are crowd pleasers, but the real MVP is the wild weed pie and the extensive list of Greek wines. This place is a great new local I can get behind!

Weed pie @greek_door might be my new favourite thing. 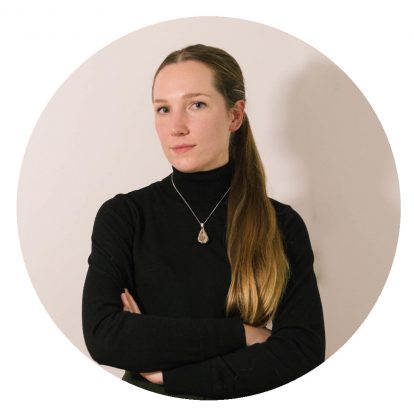 Sydney is blessed with plenty of top notch bahn mi vendors, but Marrickville Pork Roll has cult status for a reason. Memorable doesn’t really cut it — I ate so many in 2019, I couldn’t possibly forget anything about them. Not the flaky-fresh bun, that’s still so soft it’s like biting into a cartoon cloud. Not the thick, warm pork packed in generously against all the usual suspects. It’s the little things that really stay with you though; gently pickled white raddish that manages to add a little juice and crunch at once, and saying yes to chilli, knowing you won’t find them all in your last mouthful.

After 10 years as an Inner Westie, I finally changed allegiances and am now of the East (I’m not from here so I can do that). My only regret so far is moving away from Marrickville Pork Roll. Full disclosure: despite the number of these I ate 2019, I never got a good snap so I borrowed this from @annabellecloros • • • • • #Sydney #Sydneyeats #bahnmi #tastespotting #feedfeed #goodeats #droolclub

The Moreton Bay Bug I was fortunate enough to enjoy at Bennelong was literally glowing. As a kid, I was taught to revere this angel of the sea, so it was a real delight to enjoy one treated with such respect: plated up with a silky smooth lemon emulsion, brown butter and lemon jam and paired with McGuigan Shortlist Chardonnay 2016.

#tbt to eating my best lunch at @bennelong_sydney courtesy of @mcguiganwines. Grilled Moreton Bay big with lemon emulsion, brown butter and lemon jam. Can’t complain about the matching wine either—McGuigan Shortlist Chardonnay 2016, modern, fresh and well-rounded. 📷 by me, with Lightroom work by @annabellecloros who now edits my photos as well as my words 🙏

So, apart from three ridiculously tasty all-American cheeseburgers (two from In-N-Out) my eating experience State-side was kinda disappointing this time round (my fault), until we got to Julian, a small town in the mountains behind San Diego. Julian Beer Co. fulfilled a craving for brisket that’s been unsatisfied since my last trip to the US in 2014. Rounded out with pork ribs, a German-style potato salad, fresh coleslaw and a tangy BBQ sauce and washed down with fruity sour, it was…perfect.

Julian is famous for its fruit pies and Main Street offers a number of options, so we picked a shop called Moms because we liked the name. Berry pie is the best pie, imho, so I got bumbleberry featuring the trifecta (boysenberry, blackberry, blueberry) with a crumb top. My only regret is forgetting to order whipped cream. Lucky the pie was legit enough to eat alone. 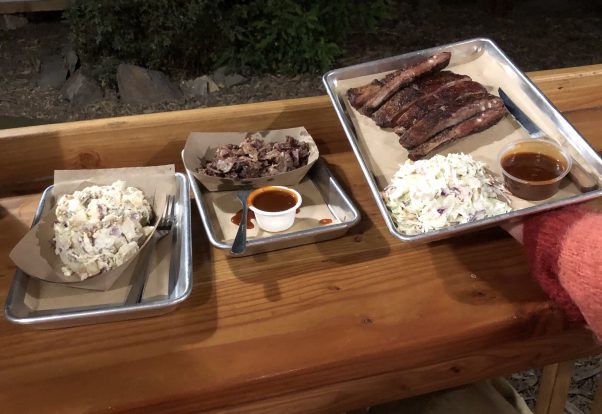 Mexico City is a well-known foodie mecca, so I relied on an Eater list to whittle it down. I’m usually not into white tablecloths, suited waiters or breakfast to be honest, but I am into all three things combined. The building itself is gorgeous and you can get a good look at the ground floor kitchen — with chefs, also in formal attire, taking orders from their leader via a mic — on your way up the stairs. Epic setting and consummate service aside, the menu was full of options I know I won’t stumble across at an Aussie brunch, like tortilla con escamoles (ant larvae) and El Cardenal’s Chocolate Dona Oliva, a comforting hot chocolate that’s frothed with a molinillo (stirrer) at your table. 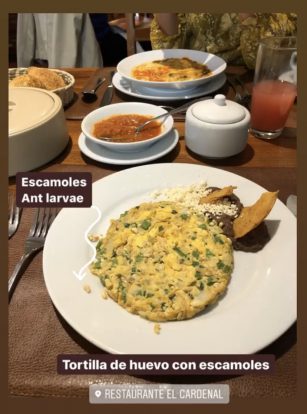 Another Eater recommendation, another memorable meal. The original location in Coayacan is apparently the go-to spot for late night tacos, but the Roma Norte didn’t disappoint at 4pm after a missed lunch and three hours in the National Museum of Anthropology followed by a long walk home. I ordered chorizo con queso and went for minimal toppings, two different sauces, onions and, my new favourite vegetable, nopales. So soft, so juicy, so tasty.