Why meat-free menus are here to stay

It’s official, plant-based dining is in. And it’s taking over menus across the country.

More than 11 per cent of Australian adults, or about 2.1 million people, have adopted a fully or mostly vegetarian diet, according to research from Roy Morgan. With figures expected to rise, restaurants and cafés are stripping the meat from their menus totake advantage of the growing market.

While there’s been a recent spike in media attention around plant-based dining, it’s not a new concept. Bodhi Restaurant has been serving vegan tapas and yum cha for three decades in Sydney’s CBD. Head chef Brooke Ng says the restaurant’s pan-Asian cuisine lends itself well to plant-based dishes. “Asian food has always had a strong focus on fresh ingredients; it wasn’t that [long] ago
that meat was considered a luxury,” she says.

“A traditional Asian family meal would always have consisted of some plant-based dishes,  so we’ve always had a strong foundation to draw on here at Bodhi.” Ng says about half of Bodhi’s customers are vegan or vegetarian, while the other half are meat eaters. “We have had customers on occasion not even realise they are dining in a vegan  restaurant,” she says. “It is always amusing to watch the penny drop and hear them say they may not have eaten here had they have known we were purely vegan, however they enjoyed the food so  much it changed their perceptions of vegan cooking.”

O Bar and Dining is another Sydney institution that has witnessed the growth of plant-based dining. The restaurant, led by health-conscious chef and owner Michael Moore, has offered vegan options for years, but has recently been giving plant-based dishes pride of place on the menu. The restaurant also offers a two- or three-course vegan set menu that highlights fresh produce from the greater Sydney region.

“Over the past couple of years, we have seen the increased sensibility of the diners coming through to the restaurant,” says executive chef Darren Templeman. “There’s less proteins going out and vegetables are becoming more of the star on the plate. They have their own place on the menu as opposed to being a secondary offering if requested. It’s really taken off.”

But it’s not just vegetarian or vegan diners opting for the menu. Templeman says by using terms such as ‘meat-free’ and ‘plantbased’, you can capture a broader audience and reduce the stigma surrounding meat-free dishes. “The word ‘vegan’ is the biggest misconception — it always sounds a little bit dull,” he says. “But when you say ‘plantbased’ and start going down that road, it really piques people’s interests.”

While plant-based dining might not be a new concept, it has experienced a new lease of life with the growing popularity of mock meats. Eggs, cheese and meatballs can be found at Melbourne restaurant Smith & Daughters, despite the fact the menu  is completely vegan. Much like Smith & Daughters’ customer base, head chef and co-owner Shannon Martinez is not vegan or vegetarian, but she’s serious about providing meat-like alternatives for plant-based diners.

“When we opened, our customers were predominantly vegetarian and vegan, but now they are predominantly meat eaters,” she says. “I think it’s because people are educating themselves because it’s in the media a lot more than it used to be. People don’t necessarily want to become vegetarian or vegan, but they’re definitely altering their diet. It’s the same for me; I don’t eat anywhere near as much meat as I used to and a lot of people aren’t anymore.” 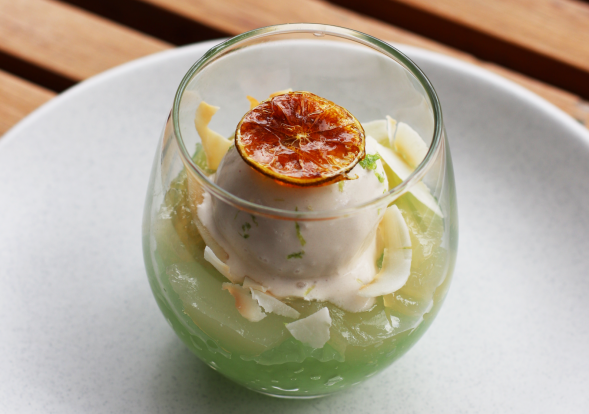 Smith & Daughters recently launched a new menu, moving from Spanish and South American cuisine to Italian, and have taken on an apt new name, Smith & Bellas. Burrata, prosciutto and squid are among the ingredients featured on the menu, but they’re all made from plant-based ingredients. “The latest one I was really excited about was a vegan ‘Nduja, which is spreadable salami,” says Martinez. “That was made by drying out mushrooms so they became a leathery texture to get the right mouth-feel and cooking them down with similar flavours to what you find in ‘Nduja, just obviously all plant-based.”

The squid is made from the konjac plant and served in saffron and tomato broth. “The konjac has a rubbery texture that lends itself well to shellfish and squid,” she says. “I cook that off in the saffron and tomato paste with fennel and green olive and then I do a gremolata on top.”

Another one of Martinez’s creations is a vegan brisket made using a wheat protein called seitan as the base ingredient, before adding beetroot purée to achieve a realistic colour. But the chef admits there is a lot of labour involved with creating a plant-based brisket.

“It’s a pretty lengthy process; you have to make the meat, or the dough, and then you have to wrap it in muslin and poach it, bake it and then smoke it,” she says. “It’s a two-day process. It would  be much easier to go to the butcher and buy a brisket.”

While adding mock meats to your menu maybe a great way to entice plant-based diners, it’s important to ensure the alternative is still full of flavour and the texture and mouth-feel is right. “I don’t like putting [a meat alternative] on the menu that doesn’t taste as good as the real thing, and a lot of it doesn’t,” says Martinez. “A lot of vegan restaurants have vegan chefs who haven’t eaten meat for so long that they don’t have a point of reference anymore — what they remember it tasting like is so far from what it actually tastes like. So the products have to be close for me to use them.”

Going completely meat-free isn’t the only way to attract plant-based diners. Sydney pub The Imperial Erskineville relaunched earlier this year with a brand new restaurant, Priscillas, which focuses on plant-based dishes with a small selection of meat options on the side. Group executive chef David Clarke says they have reversed the traditional menu at Priscillas so vegetables are the focus and meat is treated as a side.

“It’s not about the steak and three veg anymore — it’s about how you can play around with that vegetable base,” he says. “You’ve got a complete vegetarian meal that’s really exciting and then you can have a piece of meat with it. Even people who are not vegetarians are coming in and eating a lot of the [vegetarian] dishes. It’s really quite exciting.”

Clarke drew inspiration from a trip to California for the menu at Priscillas. “In Cali, I saw steakhouses boarded up and closed down and a flourish of veg-based restaurants,” he says. He was drawn  o the bold flavours and interesting cooking techniques that were used to highlight vegetables. Menu favourites at Priscillas include crabless crab cakes made with jackfruit and cauliflower plus broc ‘wings’ and coconut ceviche.

“It wasn’t intentionally going to be a vegetarian [menu], but we just couldn’t let it go, it was just too exciting,” says Clarke. He admits a completely meat-free menu was on the cards, but decided against it in order to appeal to a broader customer base. “We were definitely going that way, but we wanted to make it accessible for everyone,” he says. With a range of customers coming through the doors, Clarke says it’s important to be mindful of all dining choices. “We have a deep fryer that our seafood goes into and then we’ve got deep fryers that are nominated just for vegetables; so there’s no cross-contamination,” he says.

Clarke says customers have embraced the menu and are pleased by the reasonable pricing of the plant-based mains. “Proteins, especially sustainable seafood and good-quality meats, are always  going to be expensive,” he says. “Using plant-based items, you still use boutique [producers] and I’m still getting things grown for us, but it is a lot cheaper. We’re trying to [provide] value, and it’s  definitely better for the consumer and the hoteliers as well. “It is more profitable, but you can’t charge what you can for steaks and seafood. So it means you’ve got a lower spend per head coming in and are relying on more turnover and bums on seats to make it worthwhile.”

At O Bar and Dining, the vegan set menu is priced the same as the regular set menu. “At the end of the day, I don’t want to cheapen it,” says Templeman. “I don’t want people to think it’s the  cheaper option because it’s not — the same thought and preparation process is going on behind it.” An equal price also allows diners to pick and choose dishes from both menus. “We have a lot of people dipping between the two menus who will order a meat or fish entrée and go with a vegetarian main course,” he says. 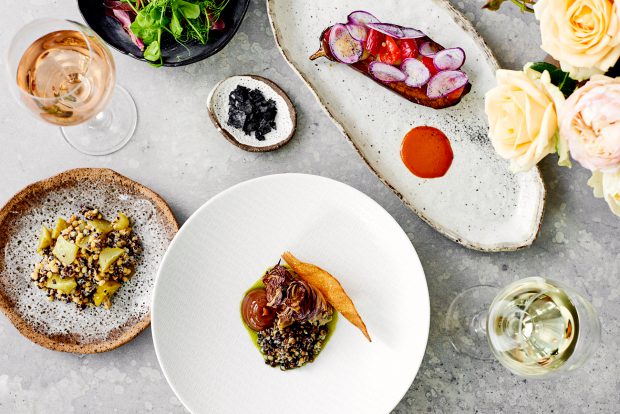 TREND OR THE NEW NORM?

There’s one thing the chefs agree on — plant-based dining is here to stay. “Veganism has come a long way over the years and is no longer considered an alternative way of life – consumers are now  far more conscious of what they put in their bodies and the environmental impact of mass food production,” says Ng.

As more restaurants explore menus beyond meat, Martinez believes plant-based dining will become the new normal. “Inherently, humans are pretty selfish and they don’t want to go without,” she says. “So we provide them with the vegetarian alternative, which is still giving them all the satisfaction they’d be getting if they go out and eat meat or dairy, but they’re feeling better about it because they know it’s all plant-based.”

Templeman agrees, and says diners are going to see the cost of food, particularly meat, increase over the next few years. “Wild food and farmed food will become out of reach for people’s budgets,” he says. “So the humble vegetable, the turnips and radishes, have now become the stars of the plate.”

Clarke says plant foods are the way of the future. “I definitely think it’s going to be the staple diet and I think proteins will either be small and in moderation or every now and then,” he says.
If these predictions are correct, plant-based dining is a movement that shouldn’t be ignored. It may not necessarily mean stripping your menu of meat, but you can capture a slice of the booming market by adding some thoughtful, plant-based options.

Smith & Daughters head chef and co-owner Shannon Martinez will be speaking at Hospitality magazine’s Restaurant Leaders Summit, taking place on 30 July 2018 at the Park Hyatt in Melbourne. Click here for the full speaker line-up and to secure your early bird ticket for just $249 + GST until 30 June.

This article originally appeared in Hospitality‘s May issue. Subscribe here.