Joe Jones and Sam Stafford ran in overlapping social circles for years, and when I say circle, I’m referring to Melbourne’s hospitality scene. But the two were never ‘friends’, per se. It wasn’t until they began working together at The Mayfair that they moved past the acquaintance stage.

Stafford was the chef and Jones the co-owner/drinks aficionado, but it was an affinity for heavy metal that led to a relationship beyond employer/employee.

The pair talks to Hospitality about taking an idea from concept to conception, moving on from The Mayfair, finding the right investors and how they’ve gone from buds to business partners.

Looking in, The Mayfair was the epitome of slick meets sophistication; a New York brasserie with a stellar menu and an equally as good cocktail list. But things were bubbling beneath the surface; and one of those bubbles was an idea for a new venue.

“We weren’t really feeling what we were doing, so we wanted to do a pop-up and give ourselves a break,” says Stafford. Jones shared the sentiment, and doesn’t mince his words. “We were both in a dark and dissatisfied place with work,” he says. “As your mind tends to do when you’re in that position, you daydream about all the stuff you’d rather be doing.”

Turns out Mono-XO was what the pair would rather be doing; a Japanese-ish yakitori bar. Stafford and Jones initially wanted to take the pop-up route, but it never eventuated. “Originally we were going to set up a barbecue at Romeo Lane [Jones’ bar] and have parties on the days they were closed,” says Stafford. “We organised them so much but kept failing on the dates we wanted to do it, and then Romeo started trading seven days.” 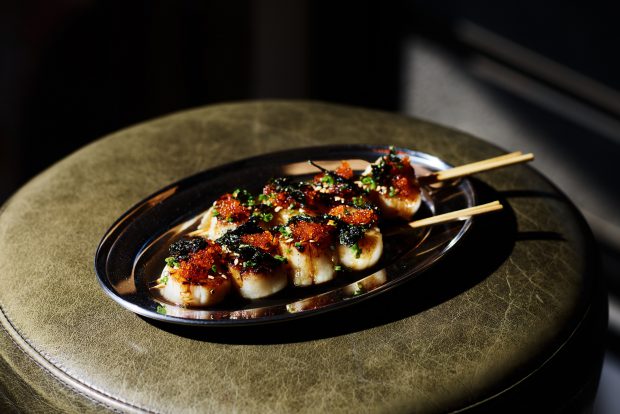 Scheduling issues aside, the concept for Mono-XO snowballed into something much bigger than a pop-up, and it would have been a discredit to put a timer on it. “It turned into a situation where we could do this if we wanted to,” says Jones. “The creativity and ideas outweighed what we could do in a month’s worth of pop-ups. We started to develop the idea and articulate it in a grander scheme to others, and that’s when we started to get support from people who said we should do it.”

While the wheels of Mono-XO began to turn, Jones and Stafford both resigned from The Mayfair, which closed its doors in January 2019. The ending might have been sour, but Jones is far from bitter — he’s grateful. “I always look back at that situation and you have to take something positive out of all the negative things, otherwise they become tragedies,” he says. “If the only good thing that came out of that was to work with Sam and establish that relationship, it’s a good thing.”

Stafford and Jones found two silent partners to go into business with, and both are accomplished in their own right. One is a retail whiz and the other has a savvy law/accounting skillset. So how did they go about selecting their partners? They already knew them. “They’re both previous friends of ours,” says Stafford. “One really likes hospitality, but he’s never worked in it. He’s the guy I talk to about finance and that kind of boring stuff. The other is a retail mastermind and he does one day a week at the venue.” 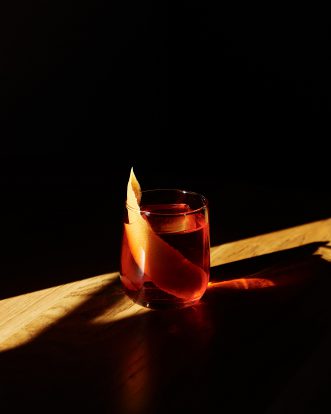 In terms of the day-to-day running of the business, Jones and Stafford are the go-to guys, but their business partners offer a wealth of knowledge. “One is well versed in real estate law, so that was helpful in getting the site we wanted,” says Jones. “Even the little nuances of getting in touch with people and making offers and
negotiating. What’s great about our setup is that everyone has a fairly unique and valuable skill-set they’re contributing.”

Mono-XO opened its doors in July 2019 in a location Stafford had his eye on for a while. “Sam used to live across the street and scoped it out from his balcony,” says Jones. “The place hadn’t opened for six months and it was just sitting there.”

The four partners were quick to snap up the Fitzroy space, but there was pause for Jones at the beginning. “A momentary lapse in my confidence, maybe,” he says. “But my feelings regarding the past workplace are personal and not to do with my ability to work well or do what I’m good at. I feel connected and trusting of the people I’m currently in business with, and that’s what remedied my withdrawal. The situation has taught me to be infinitely more selective about who I open up to and who I decide to be creative with.”

Taking the plunge signified the start of a new chapter for Stafford, who became a business owner for the first time. The chef always had plans to run his own place, but after he became privy to the lifestyle of a sole business owner, the shine of doing it yourself wore off. “All the people I’ve worked for who run small businesses have no time to enjoy life and become trapped,” he says. 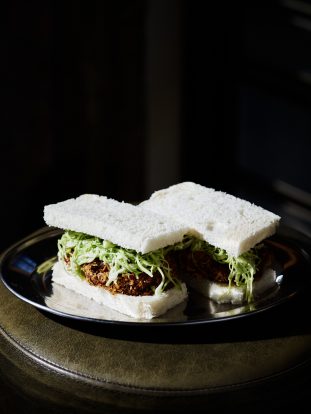 Launching a business with familiar faces was a non-negotiable for Stafford, who admits he’s “pretty difficult to work with”. (For the record, he’s super easy-going over the phone). “I can’t imagine someone I’m not friends with would be very patient with me about the things I freak out about,” he says.

“I’m very particular about certain things that may not make sense to a lot of people and Joe is the same way in how he operates. The whole concept of this venue is a bit confrontational for some — it’s meant to be very stripped back, bare, basic and fun.If someone didn’t get our personalities and we tried to sell them this idea, they’d probably think it’s a teenager’s birthday party with a barbecue. We needed people who trusted us and knew us personally.”

Pre-established personal relationships certainly have their perks, especially in environments where tensions run high at times. Jones’ training as a chef comes in handy when Stafford needs a hand in the kitchen and same goes when Jones needs to lug stock around. “With Joe and I operating the place, it’s easy,” says Stafford. “We generally think the same about most things in the venue.”

Jones and Stafford operate on the same playing field, and there’s a strong trust between the two that was formed during a testing time. And while Jones has owned Romeo Lane for the past six years, he says Stafford is “wildly ahead of his time when it comes to logic” — a huge compliment for a first-timer.

“When you’re in business you need to be blunt sometimes,” says Jones. “I enjoy that he doesn’t suffer in silence or is annoyed for no reason. He takes that element out of his day-to-day which is incredibly professional and done with a lot of foresight. We have an excruciatingly similar outlook on things. I think there’s a bit of comfort when you feel passionately about something and someone can back you up. It gives you strength.”

You hear horror stories about people who start businesses with family or friends — and they usually don’t end well. But nothing brings people together more than a catastrophic period. This one just happened to result in a venue Melbourne didn’t know it was missing.

Joe Jones has since left MonoXO. Find him at Romeo Lane.