The growth of gluten-free

It’s estimated 1 in 70 Australians live with coeliac disease and 12 per cent of the population avoid wheat and/or gluten. The figures have steadily increased over the years and show no sign of slowing down, with health and wellness a core consideration for many consumers when they dine out.

While gluten-free products have come a long way (there’s no excuse for bread that emulates cardboard in 2020!) creating a menu that doesn’t revolve around basic swaps is the key to catering to the burgeoning market.

Hospitality talks to food consultant Tomislav Martinovic and Seedling Café director and chef Georgia Mackie about what it takes to create dishes that aren’t an afterthought, how far gluten-free products have come and why every venue needs to offer more than one gluten-free option.

Quick Brown Fox café in Sydney is known for their signature congee dish, but there’s another drawcard for the Pyrmont locale — nine out of 15 options on the menu are gluten-free or gluten-free available.

Owners and siblings Ben and Emily Calabro put dietary requirements front and centre during the development phase of the venue, calling on consultant and former Fat Duck chef Tomislav Martinovic to create a widespread food offering. The goal? To design a menu that didn’t put gluten-free dishes on the backburner.

“Emily has a lot of dietary requirements, and she wanted to see more options compared to other venues,” says Martinovic. “I encourage all my clients not to think of gluten-free options as  secondary thought — if a [gluten-free] product is good, scrap the regular option and create from there.” 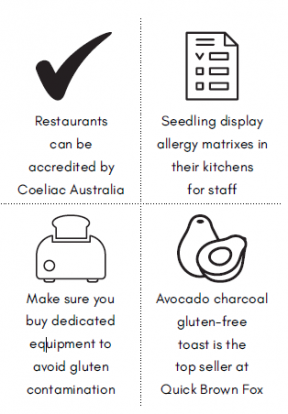 Working for a gluten-free venue also resonated with Georgia Mackie, who initially joined Melbourne café Seedling as head chef around five years ago before taking over as director. Mackie trained as a holistic health coach before she arrived in the Seedling kitchen, which at the time offered a handful of gluten-free options.

“We had standard Paninis and a few gluten-free options, but we slowly converted to a more whole foods-focused menu,” says the chef. The Seedling team noticed the gluten-free traction was gaining momentum, and took it as a sign to do something different.

“We had a lot of people coming in who were gluten-free, but they couldn’t eat at the cafe because we were using the same grill and space to make all the food,” says Mackie. “At the time, more and more gluten-free products were becoming available, so we made the decision to become 100 per cent gluten-free about four years ago. It set us apart and gave us a niche in a city with a lot of competition.” 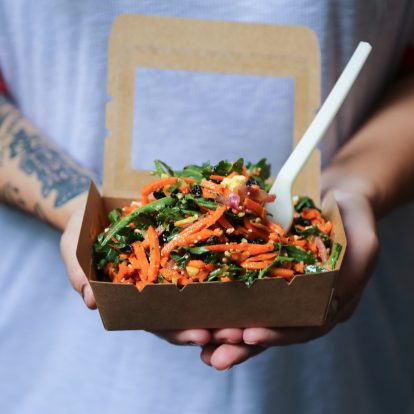 It’s no secret gluten-free products are more expensive than standard options. For example, a kilo of gluten-free plain flour will set you back over $5, while the standard is around the $1.50 mark. But if the customer demand is there, some businesses are able to work with the costs. Mackie and Martinovic both agree customers are willing to pay for peace of mind and dishes that use ‘healthier’ ingredients.

“From an owner’s point of view, I think cost is the biggest hurdle — people want to head down that road, but it’s a tough business,” says Martinovic. QBF co-owner Emily’s own experiences with dietary restrictions led the café to commit to a larger number of gluten-free options, and it seems the decision has paid off. The top-selling dish at the café is avocado with a soft-boiled egg, Nonie’s charcoal bread, chilli labneh, pickled radishes and salsa verde — and it just happens to be a gluten-free option.

“Generally speaking, eggs on toast overtake avocado on toast, so that was surprising for me to hear,” says Martinovic. “Customers love it and it doesn’t impact the bottom line for them.”

Mackie says it’s a balancing act when it comes to pricing, but customer education can go a long way. “It does cost more and all of our customers aren’t gluten-free — we’ve had people come in and say, ‘Why is a muffin $6?’ but it’s made with organic coconut flour. Our staff are really knowledgeable about what’s in our products and they can explain to customers what goes into things. There are some who don’t understand why it’s expensive, but people are usually happy to pay extra once they know. For us, it’s been about making sure we cover our costs with a profit margin in there while offering a price range people can afford to pay regularly.”

According to the 2018/19 Coeliac Australia Eating Out survey, 99 per cent of coeliacs would return to a restaurant where they had a good gluten-free experience,and Seedling has witnessed this loyalty firsthand. “We have regular customers and people who come in everyday; it’s not a brunch café that you go to once a week. While it has created a tighter margin, we’ve gained a committed following and we’re busy every lunch with lines out the door.” Worrying about whether gluten contamination has occurred is a major issue for coeliacs or those with gluten intolerances, and Seedling is able to provide peace of mind as the venue is totally gluten-free.

Martinovic is also familiar with the stress eating out can cause gluten-free individuals, and says a diverse offering is key to gaining repeat customers. “From an owner’s point of view, if you can get as many options out there, there’s a certain level of trust and consumers will keep coming back.”

The chef says some venues are a little wary about expanding their range of gluten-free dishes, but the volume of products available means there’s no excuse. “There seems to be a little bit too much resistance out there, but it’s not a massive shift from a kitchen perspective; there are a lot of ingredients out there and chefs just need to tweak recipes slightly. It’s re-engineering as opposed to a massive shift.” 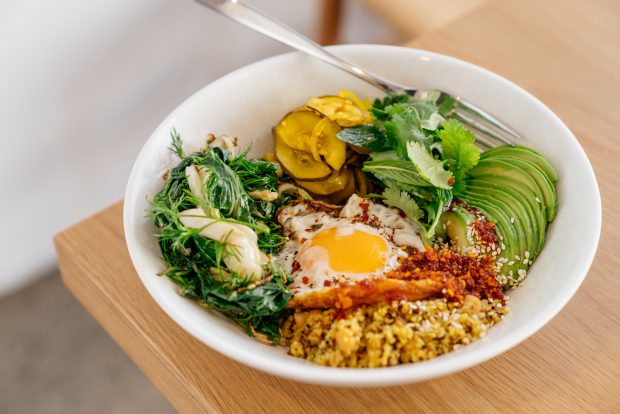 As for some go-to dishes? Both chefs say there are no limits. Martinovic credits Nonie’s as one of his favourite gluten-free suppliers and says savvy operators should consider creating gluten-free dishes from the get go. “Eight years ago, I’d probably be venting about not getting anywhere,” says Martinovic. “There are so many great products around now.”

Seedling make the majority of their products in-house and Mackie says most people don’t realise their food is sans gluten. “We have so many suppliers and there are great options for everything, so there’s not really a limit to what we can put on the menu. The smashed avo is pretty popular and we do a Buddha brown rice bowl with broccoli, beetroot hummus, sauerkraut and poached chicken. You’d never guess the food was gluten-free if someone didn’t tell you.”

From attracting new customers to adding variety to your menu, offering a range of gluten-free options is a no-brainer in the current culinary climate. “I think it’s a selling point,” says Mackie. “I’m surprised more people aren’t offering it.”